From military brat to social worker to MLA, Bonnie Korzeniowski "called her own shots"

When Bonnie Korzeniowski threw her hat into the political ring, she was 57, and "putting her money where her mouth is."

For the next 12 years, she served the people of St. James as their MLA, championed the military, and helped other women climb personal and political ladders. The social worker-turned-union activist-turned provincial politician died Oct. 15 at age 78, after suffering a stroke earlier this year.

Whether it was finding her calling, having a baby at 42, running for office, saving a heritage building or parasailing at 77, Korzeniowski was unstoppable, younger sibling Dorene Petersen said: "When she got something in her mind, she didn’t let it go."

"She was always willing to try something," agreed Alexis Sukaroff, the youngest of Korzeniowski’s four children. "She couldn’t be a wallflower if she tried. She had an ability to connect with people."

Korzeniowski spent her childhood in Germany, where her father, Cleveland Grant, was posted with the Canadian Forces. When they returned to Winnipeg, Korzeniowski was active in Highland dancing and didn’t want her younger sister borrowing her clothes.

"I used to bug her," said Petersen, adding her sister was always a snappy dresser but never a snob. Korzeniowski wore a fancy hat that she’d found at a thrift store when she met the Queen in 2010, she said.

"We had totally different lives... We didn’t see eye to eye on politics," but Petersen was there for her sister on election night in 1999. "I sat in her polling station when she won. It was exciting."

Sukaroff remembers campaigning with her mom and knocking on doors in St. James. Once in awhile, they’d get one slammed in their faces.

"She always said, ‘Have a good day,’" and never appeared hurt by it. The experience left an impression.

"I respect the politicians I see on my doorstep — it doesn’t matter what party — and that they’re willing to tell me where they’re coming from." She learned valuable life lessons campaigning with her mom, she said.

"You can’t fix everything. Not everybody is going to like you and they don’t have to," said Sukaroff. "‘You have to have a thick skin and take the good with the bad."

The "good" included winning a seat in the Manitoba legislature.

"I remember the night she got elected," said her daughter, who has a photo of herself with her mom and dad in front of the board showing the returns for St. James. "She’s wearing her power suit."

Her petite mother had a big personality that seemed bigger when she wore the white outfit. "She filled the room."

Korzeniowski grew up in a military family, married and divorced a military man, went on to become Manitoba’s special envoy for military affairs and, after retiring, continued to support the military.

"She always made sure she went to Remembrance Day services," said Sukaroff, whose family is carrying on the tradition. "She left a legacy for all us kids" to be active in the community and devoted to loved ones.

Korzeniowski had three children — Karen, Kathryn and Bryan — from her first marriage to Grant Bryan Hunt.

Their oldest was born in Germany, where Hunt and she were posted. Back in Canada, Korzeniowski got her diploma in social work. She met her second husband, Gerald Korzeniowski, when they were both working as counsellors at the Manitoba Youth Centre.

They moved in together and decided to go back to school: he for a master’s degree in architecture; she for a bachelor of social work. They married on Halloween in 1981, after making a serious decision to have a baby.

"It was a gift to me," said Gerald, who was 14 years younger than his bride. "She knew her biological clock was ticking and it was my only opportunity to be a father."

She took his last name so their child wouldn’t be saddled with a long, hyphenated surname, he said.

"That was difficult for her," Gerald said. Not just because she was a feminist taking the man’s name, but because of how long it would take her to sign 14,000 leaflets after the union-involved social worker decided to make a run at provincial politics.

Korzeniowski was on the executive council of the NDP for Minto, and when the St. James constituency was created, she was "griping" about potential candidates, Gerald said. "I said, ‘Why don’t you put your money where your mouth is?’"

She put her name forward, was nominated and handily won.

Korzeniowski was a champion for her constituency, the military, veterans — and a huge fan of actor Patrick Swayze.

(Their paths crossed in 2001, when Swayze and his wife, Lisa Niemi, wanted to use the Women’s Tribute Memorial Lodge at Deer Lodge Centre as a set for the film One Last Dance. "(Meeting him) blew her away. She was such a fan of his," Gerald said.)

After deciding not to seek re-election at age 69, Korzeniowski, who was an MLA from 1999 to 2011, remained active and adventurous.

In January 2018, while vacationing in Mexico, she wanted to go parasailing. "I said, ‘Don’t be silly, you’re not covered by insurance,’" her husband said.

He was sunbathing on the beach when a local man approached him asking to pay for the parasailer about to take off: his 77-year-old wife.

"They already had her in a harness," he said with a laugh. "She was determined she was going."

Soon she was floating above the beach at Puerto Vallarta, tethered to a speeding motorboat.

"She called her own shots. She was strong-willed."

Bonnie Korzeniowski was an ally when it came to encouraging women to run for office, says Progressive Conservative MLA and Speaker of the legislature Myrna Driedger.

“Even though Bonnie and I were on opposite sides of the political aisle, we worked together very collegially when it came to our belief that we needed to get more women into politics,” Driedger said in a prepared statement. “She had great passion for this, as well as for her role as the special envoy of military affairs.

“I also recall her dogged determination to save the Women’s Tribute Memorial Lodge in front of the Deer Lodge Centre. She cared deeply for these issues and worked diligently to advance their progress.”

Her drive extended to the role of mentor, too.

“I don’t think I would’ve been involved in politics if not for Bonnie,” said Sharon Blady, former NDP health minister who held the Kirkfield Park seat from 2007 to 2016. “She was my MLA. She was knocking on doors in the summer of ‘03. I answered the door, very pregnant with curly pink hair, and she and I hit it off.”

In 2006, Korzeniowski asked Blady to join her election preparedness committee.

“She kept teasing me with, ‘I’m going to mentor you and in five years, I’m going to nominate you,’” Blady said in an interview.

In less than one year, Blady was approached by the NDP about running in the 2007 election. She credits Korzeniowski — whom she calls a genuine feminist — with encouraging her and giving her a hand up.

“There was all that garbage about ‘leaning in’ and playing the man’s game, but that’s just assimilating and it doesn’t change things,” said Blady. “What matters is how many people are you bringing up the ladder? Bonnie did that in spades.”

“It was not, ‘I helped you, now you help me.’ She was pretty wonderful.”

Korzeniowski knew female politicians are expected to act and dress a certain way, but she was all about authenticity and being herself, said Blady.

“She knew there were places where you dial it back but, whatever you do, be you. Honestly, if more people would operate the way she did, politics would be so much better.” 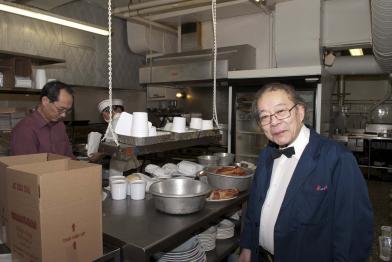