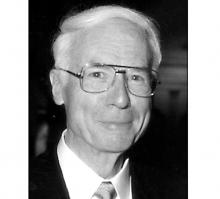 ROY JOSEPH DOWLING It is with deep regret that we announce the passing of Roy Joseph Dowling on January 9, 2017. Roy was predeceased by his parents, Edward and Grace Dowling, his brother Frank Dowling and his wife, Professor Diane (Johnson) Dowling. He will be deeply missed by his surviving family, sister-in-law Patricia Dowling, niece Virginia (Jim) Lowood, nephews Jim (Lianne) Dowling and Ed (Marianne) Dowling and their families. Roy attended St. Paul's College as a student from 1941 to 1944 where he earned a BSc (Honours) from the University of Manitoba. Roy taught Mathematics at the College from 1946 to 1948. He then went on to post graduate studies at the University of Minnesota. Upon completion of his degree he stayed on as a teaching assistant. In 1952 Roy became Associate Professor of Mathematics at St. Thomas College, St. Paul, Minnesota. He returned to Winnipeg and The University of Manitoba (St. Paul's College) to teach Math from 1977 to 1993. Roy became a senior scholar in 1993, won the Murray McPherson Award in Mathematics in 2007 and was a Honorary Member of the St. Paul's College Assembly. Roy is credited with the establishment of the Manitoba High School Math Contest. He was both very proud and passionate about the Math contest, and continued to volunteer on this program for many years after his retirement. He also was the Manitoba coordinator for the University of Waterloo math contest. The family wishes to thank Dr. L. P. Leung Shing and the staff of the Wellington for their compassion and support over the years. More recently Roy was a resident of Tuxedo Villa where he continued to receive excellent care. Prayers will be said at 7:00 p.m. on Sunday, January 15 at Thomson "In the Park" Funeral Home, 1291 McGillivray Boulevard. Mass of Christian Burial will be celebrated at 11:00 a.m. on Monday, January 16 at St. Ignatius Parish Church, 255 Stafford Street at Corydon Avenue with Fr. Joseph Newman as the Celebrant. Interment will follow in the Fort Garry Roman Catholic Cemetery, Crescent Drive at South Drive. In lieu of flowers, the family would appreciate donations being made to the Diane Dowling Memorial Scholarship Endowment Fund at St. Paul's College Foundation Inc., RM 213-70 Dysart Road, University of Manitoba, Winnipeg, MB R3T 2M6. THOMSON "IN THE PARK" 204-925-1120 Condolences may be sent to www.thomsoninthepark.com