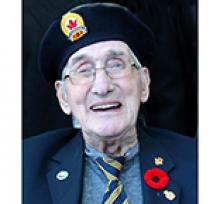 WILLIAM (BILL) BRIGHT CROCKER Peacefully at the Deer Lodge Centre, on Wednesday, January 24, 2018, Bill Crocker passed away at the age of 92 years. Bill leaves to cherish his memory, his sons, Billy (Lynne) and David (Kristine), daughter Linda (Len) Timmerman; his grandchildren Katryna (Konstantin), Joey (Kim), Sheri-lynn, Brett (Nadine), Bryn, Kristen, Kaitlyn and Nicholas; his great-grandchildren Kalem, Tia, Khloe, Kyana, Tyson, Jaime-Lynn and Jordyn, his brother-in-law Jim Sinclair (Margaret), numerous nieces and nephews, and many relatives and dear friends. Bill was predeceased by his wife of 56 years, Nancy (nee Caswell); parents William Crocker and Ivy (nee Bright); sister Joyce (Alex Kaltenberger); brothers Don (Vera), Dan (Nell), and sister-in-law Margaret Sinclair (nee Caswell). Born on October 2, 1925 in St. James, Winnipeg, Bill attended school and helped his parents on the family farm, North Devon Dairies which was located at the end of Parkview Street. At the young age of 17, Dad enlisted in the army during the Second World War until the end of the war in 1945. Coming back to Winnipeg, he applied his dairy farm experience to join Palm Dairies. He met the apple of his eye in 1955, Nancy Caswell while she was in nursing school. In 1958 they were married in Nancy's home town of Rathwell and lived in an apartment in the west end of Winnipeg and later purchased their first home on Marjorie Street in St. James. Billy and David arrived in 1960 and 1962 respectively and Linda in 1964. In 1962, Bill was transferred to Victoria, BC with Palm Dairies and moved his family to the West Coast. In 1964, farm life beckoned once again and Bill relocated his young family to Rathwell to continue Nancy's family farm. Nancy and Bill farmed a mixed grain and cow-calf operation. The family enjoyed farming for many years until they retired in the mid 1980s. Bill ingrained himself in the community of Rathwell and had numerous interests such as curling and was an avid volunteer for the Rathwell Community Hall, Skating-Curling Clubs, the Recycling Depot, Woodlands Cemetery and the School Board. He was also a long time member of the Legion #177 in Rathwell and enjoyed many military connections through his life. Bill was generous with his time and made himself available to help out with any event or project that needed extra help. In past years, Bill was the sports reporter as his column, the Rathwell Raccoon Report was written for the local newspaper and he also served to record the weather and precipitation for Environment Canada. During retirement, Bill and Nancy enjoyed travelling "down south" and spent many years touring Canada, the States, trips to England, Europe as well as a few cruises, including the most recent, their Hawaiian cruise. They also both enjoyed attending Blue Bomber games, various curling events, as well as going to antique auctions and following the Winnipeg Jets. Nancy and Bill were proud of their family and enjoyed their grandchildren and great-grandchildren at numerous events and activities. Bill kept himself busy running errands for the community, transporting friends to medical appointments or delivering apples from their orchard to all parts of the province, always with his tin of candies along. At 84 years old, Bill contracted Guillain-Barré, which slowed him down immensely. During this time, Bill and Nancy moved to Winnipeg for Bill's rehabilitation but maintained the "Summer Cottage" at the Green Prairie Lodge. He battled back but never regained full mobility, although he was still as sharp as a tack and had quick wit. Even during this trying time, he still maintained a good sense of humour and enjoyed spending time with his family and interacting with others. Bill always appreciated all of the visits, letters and cards from friends and family. A special thank you to the staff at Deer Lodge Centre for the wonderful care Dad received during his stay. He always enjoyed the people he met along his way. All are welcome to join us in celebrating Dad's life at the Rathwell Community Hall on Saturday, March 17, 2018 at 2:00 p.m. in Rathwell, MB. In lieu of flowers, donations in memory may be made to a charity of your choice. "Dad, your work is done. We will remember and cherish all you have taught us in life... Till we meet again." Online condolences can be sent by visiting www.willmorchapel.com Jamieson's Funeral Services of Holland in care of arrangements. 204-526-2380.