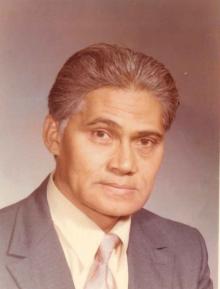 WILLIAM JOHN RHODA Surrounded by his six sons and their families, Bill Rhoda passed away peacefully on Monday, June 4, 2018 at the age of 97 years. Bill was a brilliant student graduating from high school and university with distinctions to enter his career in Education. He studied at Fort Hare, the only black university in South Africa, where future prominent South African leaders such as Oliver Tambo, Walter Sisulu, Seretse Khama and Nelson Mandela were his peers. Bill was very proud of his political efforts to change South Africa and particularly of the student walkout protest that resulted in his suspension. Bill was an avid sportsman playing tennis, swimming and captained his rugby club team, Universals, as well as the provincial Griqualand West rugby team. His strength and vigorous style of play earned him the lifetime nickname of Sabu, the South African equivalent of Tarzan. He passed this love of sports on to his sons and his grandchildren. Bill's active resistance to the odious apartheid system in South Africa made him an enemy of the state and a target of their Special Branch (Gestapo-like political police). This eventually forced him out of the country. To protect his family, the Rhodas left with an exit visa - the equivalent of being banned from their beloved South Africa for life. Fortunately for our family, there was a shortage of teachers in Canada and Bill was able to immigrate to this amazing country and raise his family in a civilized, free and democratic country. Bill led a full and rewarding 97 years of life. He married his childhood sweetheart, Gwen du Plooy in 1946. Together they raised six boys and enjoyed 66 years of marriage. Together they embraced their life in Canada, welcomed their son's wives into their family and celebrated the births, lives and accomplishments of their nine grandchildren. In Canada, Bill and Gwen discovered 5-pin bowling and went on to win several awards. Bill still holds the senior high score at Dakota Bowling Lanes. He maintained his active lifestyle and swam and golfed into his early 90s. He loved travelling, playing piano, playing Scrabble with Gwen, painting, crafting and harvesting his garden with its cherries, apples, raspberries and rhubarb. Shortly after their 60th anniversary Gwen started showing signs of early dementia, so they travelled to South Africa for a final visit with relatives and friends. As the disease progressed Gwen was placed in the Golden Links Personal Care Home where Bill would, without fail, get up early every morning and travel to the home to feed her meals and keep her company. Bill's legacy lives on in his family and the many pupils that passed through his classes. In Winnipeg the family is often told by strangers that Bill had taught them at Andrew Mynarski and of the positive influence he had on them. In visits to South Africa there were always open invitations from past students who have benefited from and appreciated Bill's guidance and tutelage. These students are now lawyers, doctors, engineers, architects and university professors rebuilding the new South Africa. On his first trip back to South Africa after the apartheid system was dismantled, teachers and students from the William Pescod High School, where he was the principal 30 years earlier, welcomed him at the airport. This meant so much to him. It is at this time that we recognize and celebrate the achievements and the long and healthy 97 years that Bill enjoyed. The family would like to thank the staff of the St. Boniface Hospital and Harmony Court for the care and support they provided. A private family service was held on June 6, 2018. Wojcik's Funeral Chapels & Crematoriums, 2157 Portage Avenue, Winnipeg 204.897.4665 www.wojciksfuneralchapel.com