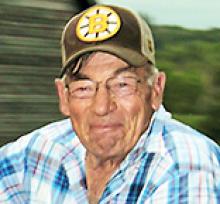 HENRY MORTON THORNBOROUGH Henry Morton Thornborough of Glenboro, MB, passed away on Thursday, July 12, 2018 at the age of 74 years. Henry leaves to mourn his passing his four children, sons, Kevin (Leila) of Calgary, AB, Trent (Lisa) of Glenboro, Glen (Bonnie) of Boston, MA, daughter Connie (Scott) Reid of Stonewall, nine grandchildren and three great-grandchildren. He is also survived by brother Jim Thornborough of Calgary, AB, sister Nancy (Martin) More of Elgin, MB as well as numerous extended relatives and friends. Henry was predeceased by his wife Margaret (nee Lyall) in 2013. Funeral services will be held on Wednesday, July 18, 2018 at 11:00 a.m. in the Glenboro United Church with Sandra Rex officiating. Interment will take place in the Glenboro Cemetery. Friends that so desire, memorial donations can be made in Henry's memory to the Glenboro Area Foundation, Box 147, Glenboro, MB R0K 0X0 or to a charity of choice. Online condolences can be made by visiting www.willmorchapel.com. Jamieson's Funeral Services of Glenboro in care of arrangements 1-204-827-2480