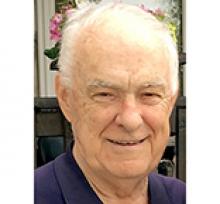 OMER GILBERT DEWANDEL It is with heavy hearts that we announce the peaceful passing of Omer, a.k.a. 'Big O', on August 16, 2018, at the age of 81. He will be greatly missed by his four daughters, Michelle Cannell (Geoff), Lia Arniel (Scott), Marcia DeWandel (Steve) and Jodi Miner (Brad); as well as his 11 grandchildren, Cody, Jayson, Adam, Brendan, Stephanie, Aidan, Connor, Bryn, Rhys, Ryan and Scotty. Also mourning his loss are his siblings, George (Elayne), Lorraine (Ken) and Herman (June). Omer was predeceased by his parents, Alphonse and Marguerite DeWandel; as well as his sister Lillian Van Wellegham. Omer was born on October 5, 1936, in St. Boniface. He always called Winnipeg home and in 1963 started a rewarding 32 year career with Manitoba Hydro as a draftsman and Supervisor in the Engineering and Construction Services Division. During this time, while raising his daughters, he found peace in escaping to the "DeWandel's Den" at Falcon Lake on weekends. Dad took great pride in his cottage and built most of it with his own two hands so his children and grandchildren could enjoy the fruits of his labour. He also loved to host family gatherings at the cottage where no one could deny his skill at Belgium bowling, and his ability to debate. Omer was a man of deep Catholic faith and volunteered many hours to the church. He was an active member of the Knights of Columbus and had also taken on a lead role this year in organizing the Serra Club Winnipeg annual fundraiser dinner in support of vocations. Many of his grandchildren never knew the extent of Dad's athletic ability in sports such as hockey, football and golf, but they did know 'Grand O' as a self-taught and talented artist whose preferences were depicting Manitoba's rugged Canadian Shield and prairie landscapes. His work was shown at the Assiniboine Park Conservatory, Wayne Arthur Gallery, Charleswood Art Exhibition, as well as the Artarama and Brushworks Art Exhibits. He divided his creative time between his Winnipeg studio and his summer residence at Falcon Lake, often painting scenes from the Whiteshell Provincial Park. In keeping with Dad's wishes, cremation has taken place. The Funeral Mass will be celebrated at 11:00 a.m. on Friday, August 31, 2018, at the St. John Brebeuf Church, 1707 John Brebeuf Place, Winnipeg, MB. The family would like to express their sincere appreciation to all the doctors, nurses and staff in the ICCS - 5th floor of the I.H Asper Institute for their loving and compassionate care of Dad, particularly Dr. Michael Yamashita and Dr. Rizwan Manji. We would also like to thank the prayers groups at St. John Brebeuf Church and Our Lady of Perpetual Help Church for their continuous support and prayers over the last month. In lieu of flowers, donations in Omer's memory can be made to Our Place / Chez Nous Drop-In Centre, where he volunteered many hours, located at 676 Main Street, Winnipeg, MB R3B 1E4. LECLAIRE BROTHERS 475 Provencher Blvd., in care of arrangements, 204-775-2220
Publish Date: Aug 25, 2018