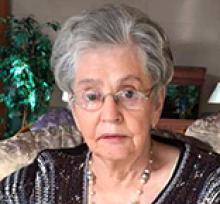 CECILE DENISE L'ARRIVEE (LEGER) August 22, 1933 - August 18, 2018 And if squinting through half closed eyes, one could surely see the long arm of Gabriel reaching down for his wife and dance partner offering to bring her home. That's the way the family saw it when Cécile passed peacefully on Saturday, August 18, 2018 at the Riverview Health Centre. It was an unlikely hour and place for a dance invitation but, as it was her custom, she accepted her loving husband's heavenly invitation. Cécile was born and raised in the heart of St. Boniface, one of three daughters and three sons to parents Beatrice (Veroneau) and Adelard (aka Pete) Leger. At an early age, Cécile was introduced to musical performance. She was designated the young and beautiful piano accompanist in her father's band, of which he played the fiddle. It wasn't long till she caught the eye of one young and handsome Gabriel L'Arrivée. Gabriel and Cécile promised enduring love to each other in a wedding ceremony on July 14, 1951. Five years later, they made a home in the Winnipeg suburb of St. James, and started a busy family that included five children. Cécile ensured that all things family included a lot of music, laughter and creative expression. She was an unconventional home maker and mother who lovingly allowed her children to grow up in a spirit of independence and joie de vivre. All the while, her piano playing and penchant to create her own musical compositions seemed endless. Where there was a piano, there was Cecile tickling the ivories and joyously singing away. Music was simply a part of her being and it readily flowed out of her. Just as music was to her a "life source", so was Gabriel. Together, Cécile and Gabriel experienced many adventures! Whether it was remodelling homes, traipsing around the continent, thrifting and garage sale hunting for treasures, furniture refinishing and running an antique furniture/curiosity shop in their retirement, Cécile and Gabriel were never idle. With her sidekick in hand, Cécile welcomed any opportunity to meet people far and wide, to laugh, to dance, to make music and to just have a good' ole time. In their final days here on earth, Cécile and Gabriel spent much time together at Riverview Health Centre under the care of their amazing staff, and often could be found hand in hand or waltzing to an old time song. After almost 67 years of marriage, Gabriel said goodbye to Cécile and passed away peacefully in March 2018. It wasn't long after Gabriel's passing, one could see in Cecile's eyes and expression that she was ready to be reunited with him in an everlasting embrace. Cécile's memory and life influence will remain in the hearts of her children and grandchildren: son Louis L'Arrivée and grandchildren, Courtney and Sebastien; son Raynald L'Arrivée (Juliette) and grandchildren, Robert (Elizabeth) and Marie Dempsey (Aaron); son Robert L'Arrivée (Darlene) and grandchild Justin; daughter Denise Klassen (Barry Wood) and grandchildren, Ashley, Aidan, Arika and Stephen; and daughter Angele Gagnon (Richard) and grandchildren, Jennica Forest (Justin), Demi and Hunter. Cécile also leaves behind her great-grandchildren, Jack, Gwendolen, Elysia, Lucas and Rowan. She will be greatly missed by her siblings, Anna Lessard (Roland), Paul Leger, George Leger, Irene Arnaud and Bernard Leger. Many nieces and nephews, cousins and friends will remember her fondly. A celebration of Cecile L'Arrivee's life will take place at the Eglise Precieux-Sang Hall, 200 Kenny Street, St. Boniface, MB at 6:30 p.m. on October 12, 2018. A graveside service will take place prior to the celebration at St. Boniface Cemetery at 3:30 p.m. In her memory, donations can be made to the Alzheimer Society of Manitoba or to the Riverview Health Centre Foundation. LECLAIRE BROTHERS 475 Provencher Blvd. in care of arrangements, 204-775-2220