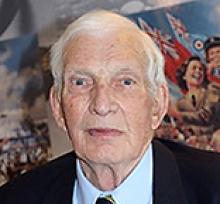 VICTOR JOSEPH PETERSON Peacefully on August 22, 2018, at the St. Boniface Hospital, our loving father and grandfather, Vic Peterson passed away at the age of 93. He leaves to cherish his memory his children, Joanne (Lloyd), Vic (Ann) and Larry (Ann); daughter-in-law Shara; sister Margaret; sisters-in-law, Dorothy and Alice; grandchildren, Michael (Rachel) and Brett (Kim), Chelsea (Mark) and Wade, Kyle (Christy), Carly (Duelle) and Colin; great-grandchildren, Tyler and Devin, Malcolm and Jacob; and his many nieces, nephews and their families. He was predeceased by his parents, Evald and Ingeborg Peterson; his beloved wife Gay, and his youngest son Ron. He was also predeceased by his five brothers, Gotthard, Alvin, Hartley, George and Art. Vic was born on June 22, 1925 in Teulon, Manitoba and grew up in the Norris Lake District on the family farm. He was a very proud member of the Royal Canadian Navy in the Second World War until his discharge in 1946. He then completed Auto Mechanic training in Winnipeg and initially worked at a local garage until 1951 when he joined the CNR. He worked as a brakeman and conductor on freight trains with the CNR for 32 years until he retired in 1983. After retirement, he devoted his time and energy to curling and golf with the Heather Seniors group and to his beloved cottage at Wanipigow Lake where he cultivated many lasting friendships. Vic was an active member of the Henderson Highway Legion Branch No. 215 for over 50 years. A gathering of family and friends celebrating his life will take place at 2:00 p.m. on Thursday, August 30, 2018 at the Klassen Funeral Chapel, 1897 Henderson Highway, Winnipeg, MB. Luncheon will follow at the Henderson Highway Legion No. 215, 3600 DeVries Ave., Winnipeg, MB. In lieu of flowers, donations may be made to the Norris Lake Cemetery or a charity of your choice. LECLAIRE BROTHERS 475 Provencher Blvd., in care of arrangements, 204-775-2220