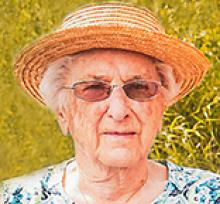 DOROTHY ELEANOR NORTH On August 23, 2018, Dorothy Eleanor North passed away peacefully at Carman Memorial Hospital, surrounded by her large and loving family. She was the fifth child born to William Christie Hartley and Cora Persis Amanda Hartley (Goodwin) on November 7, 1915 in Carman, Manitoba. She was raised in Selkirk and Minnedosa, Manitoba with her brother and five sisters. Dorothy attended Brandon College to become a teacher and then spent several years teaching at Alonsa, Birch Point and Caliento. On Friday, December 5, 1941, Pearl Harbour weekend, she married Dr. Clinton North. She became a homemaker and mother of six and these were many happy years. Sports were always an important part of Dorothy's life, whether she was watching her children and grandchildren playing baseball, hockey, curling or golf or participating herself. She was an avid golfer at Carman Golf Club where she scored a hole-in-one. Dorothy was granted a lifetime membership at the Carman Golf & Curling Club. She represented Manitoba in the Senior Ladies' curling competition in Charlottetown, PEI. When not participating in active sports, her passion was playing bridge. She and Joan Lawson taught many local players the game of bridge. She travelled across this magnificent country of Canada, from coast to coast and throughout all of United States and a little bit in Mexico. Dorothy travelled extensively in Europe on several occasions and also to Egypt and Israel. Dorothy was predeceased by her parents, and her siblings, George Hartley, Kay Randolph, Flossie Langille, Winnie Rollins Clark, Reta Porter Alldred and Willa Mogk. In 1980, she was predeceased by her husband, Dr. Clinton North. Dorothy is survived by her children, Willa Keith, Marilyn Clearwater, Karen Funke, Bill (Marilyn) North, Blake (Racille) North and Bruce (Odette) North. She is also survived by 16 grandchildren, 32 great-grandchildren and two great-great-grandsons. She is survived by her sister-in-law Margaret North of Victoria, BC, and by many nieces and nephews. The family would like to express special appreciation to Bonnie and Charlie Froebe and Della and Ken Heaman who adopted our mom and kept her supplied with flowers at the Boyne Lodge and took care of us in Palliative Care. We would also like to express thanks to the Boyne Lodge for their years of care and to the wonderful nurses in the Palliative Care unit at Carman Memorial Hospital. Cremation has taken place and a private family celebration will be held at a later date. Memorial donations may be made to Boyne Valley Hostel Corporation, Box 1644, Carman, MB R0G 0J0. Doyle's Funeral Home in care of arrangements. www.doylesfuneralhome.ca