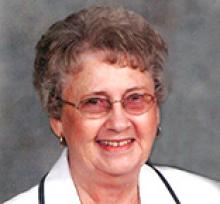 IRENE GERMAINE KLASSEN (HURTECANT) Peacefully, on October 14, 2018, after a courageous battle with cancer, Irene was called to the house of the Lord. She will be sadly missed by son Randy (Louisa), grandchildren, Dionne (Brian), Nyree, Daniel (Sandra), Meghan (Neil), Jesse (Lisa) and Robert, great-grandchildren, Rose, Ruby, Coen, Rylan, Sierra, Wyatt, Oliver, Ronan and Lucas; daughter Janice (Joe) Van Dasselaar, grandchildren, Jaclyn (David) and Tyler (Andrea), great-grandchildren, Jamie, Shannon and Jack; sister Rachel Fisher, sister-in-law Doris Klassen, and special friend Beulah Morrison. She has many nieces and nephews that she cared for very much. Irene was predeceased by husband Jack, infant daughter Karen, sister Germaine, parents, Louise and Hector Hurtecant, brothers-in-law Johnny Fisher and Al Knox, and nephew Howard Schulz. Irene worked at the Eatons Department Store for a few years before marrying Jack and moving out to Fannystelle to become a homemaker. She was an avid baker, and did a lot of preserving and canning for the winter season; she especially made great dill pickles. She and Jack did a lot of travelling to the west coast, Hawaii, Quebec, Ottawa and Arizona. They spent many winters in Arizona. They learned how to square dance and spent many a day going to Jamborees and joining many clubs, sometimes dancing seven days a week. After Dad passed Mom lived at Sturgeon Creek Retirement and enjoyed her seven years there meeting new people and doing various outings. The family would like to thank the McEwen Unit at St. Boniface Hospital for all their care and Donwood Manor Personal Care Home for their kindness and care during her short stay there. In lieu of flowers, donations can be sent to the McEwen Unit, 363 Tache Ave., Winnipeg, MB R2H 0G1 or St. Andrew's United Church in Elm Creek. Funeral service will be held at 11:00 a.m. on Friday, October 19, 2018 at the Elm Creek Mennonite Brethren Church, 146 Poplar Ave., Elm Creek, Manitoba. Interment to follow at Thomson "In the Park" Cemetery at 3:00 p.m. Rest in Peace Mom 'til we meet again. Doyle's Funeral Home in care of arrangements. www.doylesfuneralhome.ca