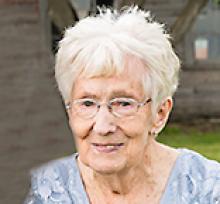 EVELYN LAHURE It is with great sadness that we announce the peaceful passing of Evelyn Lahure, in Winnipeg, at Brightwater Senior Living of Tuxedo, on Saturday, November 3, 2018, at the age of 92 years. Evelyn will be lovingly remembered by her son Allan, daughter Marlene and son-in-law Camille Roy; grandchildren, Stephanie Tait, Quentin Lahure, Christopher and Daisy Lahure, William Lahure, Nikki and Scott McNicol, and Ryan and Melissa Roy; and, great-grandchildren, Logan Ungungai Lahure, and Lily Ann McNicol. Also left to cherish her memory are her sisters, Margaret Wood and Chrissie Malcolm, in Scotland and sisters-in-law, Betty Bisset and Millie Lahure, in Vancouver, and Ruth Bisset, in Winnipeg, together with their families and many friends. In addition to her husband George, she was predeceased by her infant daughter Moreen; brothers, William and Allan Bisset; daughter-in-law Joyce Lahure; and in-laws, Harry and Pearl Lahure, Ida and Stan Hodgson, Marcel Lahure, Bill Wood and Ian Malcolm. Evelyn was born on August 2, 1926 at Gollanfield Cottage, Onich, Scotland, eldest of five children of William and Johanna (MacKenzie) Bisset. After completing her education at Forres Academy, she was employed as a companion to the young Lady Arabella Stewart at Darnaway Castle. She met George during the Second World War, when he was stationed at nearby Cooper's Hill with the Canadian Forestry Corps. They were married in August 1944. George returned to Canada in March 1946 and Evelyn followed with the War Bride movement in June of that year. She and George lived in Graysville, Manitoba for about a year before settling on a farm in the Roseisle area. With its rambling old house, tall pines, apple orchard, and yard full of growing things, it became the family home for nearly half a century. Evelyn was active in the community as a member of the Women's Institute, and later the Roseisle Friendship Club. She and George were 4-H leaders for a number of years. In Roseisle, she was a member of the United Church, the Community Club, the Rose Committee and the executive of the War Memorial Project. Each year, she looked forward to the Carman Fiddle Festival where she would volunteer her time and soak up old-time music for three straight days. She played the accordion and could sometimes be persuaded to join in a kitchen jam session with other local musicians. Evelyn was a talented floral designer. She won many awards at local fairs for her live and silk arrangements, as well as her jams and jellies. She was thrilled to be asked to create wedding flowers and décor for many of the young brides in the community. She donated corsages, boutonnieres, arrangements and décor to many local events. She made over 100 jars of her special strawberry jam as favours for Nikki and Scott's wedding. Evelyn and George loved spending time with their family, especially the grandchildren. They also enjoyed entertaining visitors, curling, old-time dances and travelling. Evelyn had a few memorable bus trips to Florida with George, and many winter vacations in Victoria with McPhails Travel. She travelled to Hawaii for Chris and Daisy's wedding, and was fortunate to return to Scotland four times. Her greatest adventures, however, were her trips to Baker Lake, Nunavut to visit Allan, Joyce and family. There she was exposed to the Inuit culture, and was drawn into all the community activities. She was charmed by the warmth of the people, and their love for her family. In 1995, Allan built a new home for Evelyn in Sunnyside Development in Carman. In 2009, she reluctantly left rural Manitoba and relocated to Winnipeg. A celebration of Evelyn's life will take place on Thursday, November 8 at 11:00 a.m. at the Carman United Church, 134 1st Street, Carman, Manitoba, with Lynne Sanderson presiding. Interment at the Miami Cemetery will follow the reception. In lieu of flowers, donations may be made to Ronald McDonald House, 566 Bannatyne Avenue, Winnipeg, MB R3A 0G7 or the Roseisle Memorial Rose Garden, P.O. Box 65, Roseisle, MB R0G 1V0. Doyle's Funeral Home, Carman in care of arrangements. www.doylesfuneralhome.ca