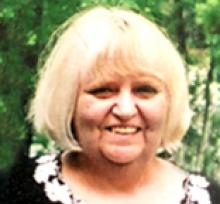 GWEN CRAWLEY 1949 - 2019 On March 2, 2019, Gwen Crawley passed away after a short but courageous battle with cancer. As was her wish, she was in her home and surrounded by her family and pets until the end. She is survived by her husband Harry, children, Joe, Caitlin (William) and Hugh (Erica), granddaughters, Rhiannon and Teagan, sister Frankie (Jim), and nephew Chris (Candance). Gwen was born in Winnipeg on March 22, 1949 to Hugh and Francis "Jimmy" Williams. She grew up in St. Vital with her parents and older sister Frankie. After living for a year in Saskatoon and Hudson Bay, Saskatchewan she moved back to Winnipeg in 1969. In November, 1970 she moved into the Gannon Apartments - as it turned out, in the apartment right next to Harry. They met on Remembrance Day when Harry asked to borrow a cup of butter. One thing led to another and two years later they were married and moved into their first house on Baltimore Road. In 1974 they welcomed Joe into the family and relocated to Ash Street. In 1977 Caitlin arrived and the next year the family moved to Churchill Drive where they remained for 11 years. In 1980, after several prior jobs focused on helping the most vulnerable, Gwen began what would be her career for the next 39 years at Klinic Community Health Centre as a medical assistant and proud "pamphlet lady." In 1989 Gwen and the family made their final move out to Sapton Road which coincided with the arrival of Hugh. For the next 29 years Gwen enjoyed many summer days on the porch swing and winter nights in front of the fire usually with a cup of tea in hand. During her final years, some of her happiest times were spent by the lake at Matlock especially when she was joined by her children and grandchildren. A come and go Celebration of Life will be held on March 16, 2019 between 4:00 p.m. and 7:00 p.m. at the Viscount Gort Hotel, 1670 Portage Avenue, Winnipeg, Manitoba. In lieu of flowers, donations may be made to Interlake Eastern Health Foundation, Box 5000, 120 Easton Dr., Selkirk, MB R1A 2M2. The family wishes to express its gratitude to the entire Eastman palliative care team and to Doctor David Bolton for everything he has done through the years. Doyle's Funeral Home, Carman in care of arrangements. www.doylesfuneralhome.ca