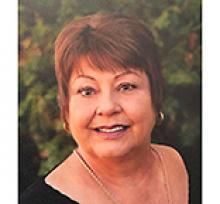 With great sadness we announce the passing of Lenora Jean Gray on April 7, at the Health Sciences Centre, at the age of 78 years.
Jean was predeceased by her infant son John Allen Gray, her mother Jennie Robinson, stepfather Al Fuller, stepbrothers, Jack (Arva) and Dade (Bea) Fuller, and stepsister Isobel. Jean will be lovingly remembered by her husband Dennis, of 58 years, children, Denise (Allan) Caners and Laurie (Jamie) Pearson; also her six grandchildren, Chad (Diane), Dana (Chris), Denal (Waylon), Ryan (Heather), Lindsay, Drew (Alanah); and her 4 great-grandchildren, Reilly, Alyse, Huxley and Sadie. Jean will also be missed by her sister Janet Armstrong, her two stepbrothers, Bill (Diane) and Alvin (Mary) Fuller, and her numerous nieces and nephews.
Jean was born and raised in Carman. After completing her schooling, she went on to become a hairdresser. In 1960, Jean met the love of her life Dennis Gray and they married a year later. With Dennis being an R.C.M.P. officer, they lived in many communities including Hodgson, Beausejour, Boissevain, Cranberry Portage, and finally Winnipeg. Jean was an excellent cook and loved to entertain her family and friends. Some of her hobbies included gardening, canning, and rearranging furniture in her home on a bi-weekly basis.
Our family would like to extend our thanks and gratitude to the care given to Jeanie by the medical staff at Health Sciences Centre. A special thanks to Ivy and Glenda for their friendship and care over the years.
A graveside service was held on Thursday, April 11, 2019 at the Greenwood Cemetery in Carman.
In lieu of flowers, memorial donations may be made to CancerCare Manitoba, 675 McDermot Ave., Winnipeg, MB R3E 0V9 or to a charity of one's choice.