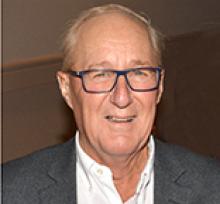 Rudy Jacob Bergen, age 73 years of
Carman, Manitoba passed away surrounded by family on Monday, April 15, 2019, at the Boundary Trails Hospital.
Rudy was predeceased by his mother
Katharina and father Jacob.
He is lovingly remembered by his wife of 38 years, Janet, and his two children, John (Laurhys) and Rina Dyck (Brad) as well as five grandchildren, Dane, Madeline, Bailey, Colby and Mason. He is also remembered by his four younger sisters, Katie Hoas (Emil), Margaret Thiessen (Bob), Rita Voth (John), and Edna Dyck (Brian) and one brother-in-law Bob Schnell (Connie).
Rudy was born in Russell, Manitoba at the very start of the baby boom in 1945. He spent his early years on the farm near Hayfield, Manitoba before the family moved to a farm near Warren in 1954. Rudy attended Warren Collegiate and Red River Community College while working on the family dairy farm. Rudy was baptized in the Schoenfelder Mennonite Church. He played hockey, baseball, enjoyed curling and in his early years, track and field. He was also a longstanding member of the Meadows Community Club.
Rudy met Janet, the love of his life in 1979, and they were married shortly after in 1980. Rudy was overjoyed at the arrival of his son John in 1981 and his daughter Rina in 1983. As a dad, Rudy spent countless hours
coaching minor hockey and driving his kids and their horses to numerous events across the province. At the same time, he transitioned the farm from dairy, to grain and eventually bison production before taking a job with Manitoba Crop Insurance
Corporation.
With the arrival of grandchildren, Rudy and Janet made the decision to leave the
family farm in 2012 when they purchased their retirement home in Carman, Manitoba. Rudy spent his days curling, golfing and
caring for their yard. Rudy was also fortunate to travel with Janet and friends to places such as Alaska, Australia, England, and the
Maritimes, as well as winters with friends in Texas and Arizona. As busy as his retirement was, Rudy always found time for his family, especially when it came to helping John and Brad on their farms whenever needed.
In February of 2017, Rudy was diagnosed with Multiple Myeloma, a terminal form of Cancer found in his bone marrow. The illness meant Rudy needed dialysis three times a week as well as weekly chemotherapy to keep the cancer from spreading. Through the ups and downs of his two years of treatment Rudy was present for trips to the lake, tractor and combine rides, grandchildren's recitals and sports as well as gatherings with family and friends.
Rudy will be remembered as a kind and gentle soul with a great sense of humour. His patience was evident even through his battle with cancer. He was a hard worker who left an incredible legacy for his family and friends.
Janet and her family would like to
recognize the dialysis team at Boundary Trails Hospital, Dr. Woelk and his team in the Cancer ward, and the numerous volunteers who always drove Rudy to his weekly
appointments.
A service for Rudy will be held on Tuesday, April 23, 2019, at Carman Mennonite Church at 2:00 p.m.
In lieu of flowers, donations can be made to the South Central Cancer Resource Centre.