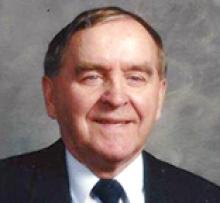 
Sadly we announce the passing of Stanislaw Walichnowski, in the early hours of June 1, 2019.
Stan is survived by his sons, George (Berna) and Andrzej (Marlene); his grandchildren, Robert, Jennifer, Alycia, James, Kathryn (Rory Walker) and Michael; sister Jasia; sisters-in-law, Jadzia of Poland, Wanda of Kenosha, Wisconsin, Valla and Sylvia of Winnipeg; along with many nieces and nephews in North America and Europe. He was predeceased by his parents, Rozalia and Josef; brothers, Dyziek and Tadek; his dear Helena; brothers-in-law, Wacek, Kaz, and Adam; and his nephews, Tony and Gerry.
Born in Skierniewice, Poland, Stan and his siblings lived an adventurous home life, prior to the outbreak of the Second World War. During the war, at the age of 16, Stan was taken by the Nazis as a forced labourer. After escaping to Italy, he joined the Polish Army Second Corps. After the war, he was transferred to England and then discharged. In 1948, he met his future bride Helena Wojtas in Fairford, Gloucestershire. They married and had two sons and in 1956 the family immigrated to Winnipeg to be near Helena's father and brother amid a thriving Polish community. After a few jobs in the booming Winnipeg construction scene, Stan was hired by the University of Manitoba Maintenance Department. He retired after over 30 years of service as a Locksmith.
Stanislaw was a member of the Polish Gymnastic Association "Sokol" for over 60 years, serving in many positions including President of the Organization. He was also a member of the Polish Sokol Folk Ensemble for nearly 40 years; in addition, Stan was also a member of the Royal Canadian Legion Branch 246 since its inception. With all of this going on, somehow, he managed to find time to go travelling, camping and fishing with his family.
The family wishes to thank Dr. Babick and the staff at St. Joseph Residence for their compassion and care of our father.
Mass of Christian Burial will be celebrated on Monday, June 10, 2019 at 11:00 a.m. in St. John Cantius Roman Catholic Church, 846 Burrows Avenue with Rev. Fr. Henryk Laciak presiding. Interment will follow at Holy Ghost Roman Catholic Cemetery, 4287 Main Street, Winnipeg, MB.
In lieu of flowers, kindly make a donation to Juvenile Diabetes Research Foundation of Canada, 191 Lombard Avenue #1000, Winnipeg, MB R3B 0X1 or the Parkinson Society of Manitoba, 414 Westmount Drive, Winnipeg, MB R2J 1P2.