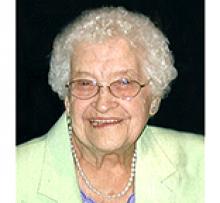 It is with sadness that we announce the passing of our mother, grandmother and great-grandmother, Evelyn Kilfoyle, at the age of 98, at the Tiger Hills Personal Care Home, Treherne, MB on Saturday, June 8, 2019.
Evelyn was born October 22, 1920 in the Southfield District and was the eldest daughter of Fred and Mary Purkess. Mother married Robert Lauder August 1, 1939 and farmed down at the river until moving up in the fall of 1948 to the Arizona District. They had three children, Doris, Beatrice and Bobby. Robert passed away February 1, 1950. In October of 1956, Mother married Roy Kilfoyle. They had one daughter, Vera. They farmed until Dad's retirement. Roy passed away in December of 1999. Mother and Bobby remained on the farm until Mother went into the care home in the spring of 2017.
Mother was an avid gardener and always had a bountiful garden of fresh vegetables and she canned everything. Her most prized plants were her gladiolas. She grew many bouquets that filled her kitchen table and we have many pictures taken with her beautiful glad's. Mother enjoyed her friends and the many card games that she hosted in her home. They were, for sure, a fun filled evening for all her guests. Every Sunday she would prepare a dinner for those who showed up. Some Sundays were pretty full at the table enjoying a lovely chicken dinner and homemade bread. Mother always had some homemade sweets in the house to have on hand when any neighbour came in for tea or coffee.
Evelyn was an active member of the Arizona Lady's Group for many years and was one of the active members to bring back the group and reconstruct the hall. She was very proud of it and enjoyed the ladies who she regarded as close friends.
Besides her brother Norman Purkess, Evelyn leaves to mourn her passing, her daughter Doris, granddaughter Norma, two great-grandsons, Chris and Aaron; her son Bobby; grandson David, his wife Sherri and two great-grandsons, Jonah and Sammy; and by her youngest daughter Vera and husband Ian and their three children, Brittany, Kyle and Brett.
Evelyn was predeceased by her husbands, Robert Lauder and Roy Kilfoyle, daughter Beatrice Kopecky, granddaughter Barbara, parents, Frederick and Mary Purkess (nee Baillie), brothers, Gordon, Reg, John, Jim and Harry, sisters, Mary Jones, Edith Woodward and Lily Patterson, and by sons-in-law, Reg Mashinter and Jerry Kopecky.
A graveside service will be held on Friday, June 14, 2019 at 11:00 a.m. at the Sidney Cemetery, Sidney, MB, with Heather Grobb officiating. Following the interment, a reception will be held in the Arizona Hall. Everyone is welcome.
Friends that so desire, memorial donations can be made in Evelyn's memory to the Sidney Cemetery Board, c/o Joan Manns, Box 72, Sidney, MB R0H 1C0 or to the Arizona Hall, c/o Marlene McIntyre, Box 135, Austin MB R0H 0C0.

Online condolences can be made by visiting www.willmorchapel.com