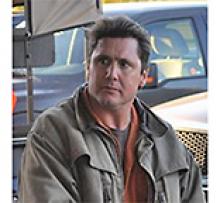 It is with profound sadness that we announce the passing of Greg Deger on June 6, 2019, at the Health Sciences Centre, at the age of 54.
Greg is survived by his loving wife of 20 years, Michelle, his mother Elsie, his sister Linda, and his brother Anthony (Tony). He was predeceased by his father Anton (Tony) in 2003. Also left to cherish his memory are his father-in-law Wayne Van Walleghem, mother-in-law Léonne, brother-in-law Cory and wife Theresa, and lastly but by no means least, his two devoted companions, service dogs, Chester and Zak.
Greg was an accomplished and passionate outdoorsman and cherished every moment spent with his wife and friends developing and enjoying his remote hunting retreat near Pine River, MB. Greg's culinary skills were second to none, and the patience and craftsmanship that he demonstrated during the construction and detailing of all manner of static and radio-controlled scale models generated results that were entirely world class. There is absolutely no task that Greg undertook that was not completed to the highest and most exacting standard.
Greg's spirit and perseverance never wavered despite the progressive erosion of his strength and mobility caused by a rare and debilitating disease. Despite this enormous handicap, his fierce tenacity made it possible for him to cultivate his many abilities and interests. Greg savoured everything that life had to offer and was true to himself in the face of challenge and adversity; such is the measure of a fine man and the essence of a life well lived. Inexplicably, it was not his affliction that stole him from our lives, but simply an accident that occurred while he was out in the neighbourhood with his two beloved dogs.
Greg will live on in the memories of his family and friends. We will ask ourselves, from time to time, what Greg would think of a given situation, and smile at what would have been his most likely response. We will reflect on his openness and honesty, his resilience and courage, his warmth and humour, his many talents, and yes, even those subjects that were occasionally cause for disagreement. It is the entire person we loved and appreciated, and it is the same person we will never forget.
Please join Michelle, and the Deger and Van Walleghem families to remember Greg on Tuesday, June 18, 2019 at 1:00 p.m. at the Niakwa Country Club, 620 Niakwa Rd., Winnipeg, MB.
In lieu of flowers, please consider making a donation to the Canadian Association for Glycogen Storage Disease, P.O. Box 56009 1st Avenue Market, Vancouver, BC V5L 5E2 or to the Heart & Stroke Foundation of Canada, 110-1525 Carling Avenue, Ottawa, ON K1Z 8R9.