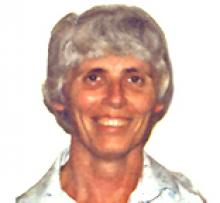 Barbara Anne Frame (nee Jamieson) of Winnipeg MB, passed away at the Victoria General Hospital on Tuesday, June 25, 2019 at the age of 88 years.
Barbara leaves to mourn her three children, Daryl Frame of Winnipeg, David and wife Brenda Frame of Calgary, AB and Rob Frame of Wynyard, SK; grandchildren, Janet and husband Wayne Pincemin, Greg Frame and Jeffrey Frame and wife Danielle Taylor; great-grandchildren, Everett and Isla as well as extended relatives and friends.
Barbara was predeceased by her husband George (1978), parents, Alex and Vera Jamieson, brothers, Bill and Jack, sisters-in-law, Elvina and Non Jamieson, infant brother Donald Jamieson and brother-in-law Jack Frame.
Barbara went to Normal School and taught near Darlingford, in Holland and at Linwood School in Winnipeg. The job she truly loved was as head of the Boys and Girls department at Westwood Library where she worked until retirement. Through her work, she made many friends in the community.
A family graveside service will be held at a later date at Chapel Lawn Memorial Gardens, Winnipeg, MB.
For friends who so desire, please donate a children's book in Barbara's memory to a library, women's shelter or other worthy organization.

Online condolences can be sent by visiting
www.willmorchapel.com.

Jamieson's Funeral Services of
Holland-Glenboro in care of arrangements.
204-526-2380