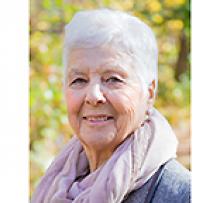 Peacefully yet unexpectedly, on Tuesday, September 3, 2019, at her home La Residence Despins in St. Boniface, Claire, our beloved mother, grandmother and sister, passed away at the age of 84 years.
Claire is survived by son Yves, daughter Réjeanne (Robert) Dorge, and grandson Justin Dorge; by her sisters, Marie-Anne Desorcy, Edmée (Bram) Tilroe, Huguette Shirley; and by brother Alain (Muriel) Hogue.
Mom was born and raised in Ile des Chênes, Manitoba on the family dairy farm. She attended boarding school under the tutelage of les Soeurs de Saint-Joseph in Lorette, and then continued on to Normal School where she obtained her teaching degree. Claire taught for over 30 years in several schools in rural Manitoba (La Rochelle, Northstar, Ile des Chênes, and Lorette), Winnipeg (Norwood and Archwood Schools) and was Principal in Red Lake, Ontario.
Mom met her future husband, Jos Bérard, at a country dance while she was teaching and living at the teacherage in the St. Pierre-Jolys area. They married in 1957 and moved to Ontario where she continued teaching and Jos worked in the gold mines. In 1962 they welcomed their first baby, a son, Yves, and settled back to Ile des Chênes to be closer to home and family. Claire continued teaching in Winnipeg and met her best friend, teaching alongside Stella Orisko (deceased), a friend she cherished and remembered until her last days. In 1974, Claire and Joe welcomed a daughter, Réjeanne, and their family was complete.
Claire's greatest accomplishments were her teaching career and raising her family. She was a devoted mother, daughter, wife and grandmother. We never wanted for anything; she always made sure we had whatever we needed. She was our rock, the glue that held us together. She was our supporter, cheerleader, confidante and shoulder whenever we needed her. She also made the most awesome cookies!
Faith was always important to Mom, attending church while she was still able, and reciting her rosary daily. Her beads were never far away and always at her bedside.
After her retirement, Claire started a small flower arrangement business which she loved. The basement became converted to her craft studio and was jokingly referred to as "the jungle" as the number of plants and flowers grew ever larger. Arrangements hung everywhere in the house.
What started as a hobby soon became a passion: the glue gun at the ready at a moment's notice. Mom and Dad also travelled often with their fifth wheel, on weekends or longer usually in and around Manitoba. One of their most memorable and last trips was to Alaska in 1998.
In her later years, Mom cared for Dad's every need when he became ill with metastatic cancer, and then again when he developed dementia. She became a proud and devoted grandmother to grandson Justin when he was born in 2001. Mom did not want for much, her connection to her family was always at the very top of her list.
Mom was a breast cancer survivor. Later, she developed dementia herself and though stubbornly (her own words!), she realized that even with help she could no longer live alone. She moved to Supportive Housing at Residence Despins in 2015 where she made new friends and became socially active again. Her every need was looked after. She played cards with her friends right up to the evening before she passed away.
We are so blessed and grateful to have had her as our mom. We will miss her unconditional love, her dry sense of humour and her wonderful hugs. Fiercely independent until the very end, we can only hope to age as she did with such grace and dignity.
The family wishes to thank the staff at Residence Despins for their care and compassion towards Mom during the last four years. Our heartfelt thanks to Dr. Kevin Coates, who accompanied Mom since his early years in medicine, and during some of her most difficult times. We are forever grateful for your close attention and care.
A memorial service will be held at 1:00 p.m. on Tuesday, September 10, 2019 at the Niakwa Country Club, 620 Niakwa Road, Winnipeg, MB.
In lieu of flowers, donations may be made to the Canadian Cancer Society at www.cancer.ca or 193 Sherbrook Street, Winnipeg, MB R3C 2B7.