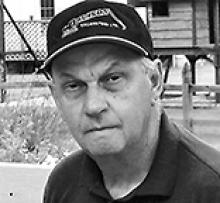 Peacefully on September 2, 2019 Roger Comeau passed away at St. Boniface General Hospital, at the age of 79.
He was predeceased by his parents, Omer and Jeanne (Lavoie) Comeau; three brothers, and two sisters. He is survived by his wife of 56 years, Blanche (nee Mongrain); his sons, Guy (Jenny) and Claude (Wendy); grandchildren, Ella and Stephan; brother André (Ruby); brothers-in-law, Charlie and Lucien; and many nieces and nephews.
Roger was raised in La Salle, and spent most of his life living there. He worked many years for PCL Construction on several of Winnipeg's largest projects. He took immense pride in helping build Winnipeg's skyline. After he retired, he continued working for others, building kitchen cabinets and maintaining his beloved yard. There was never a job he didn't tackle with fervour. He loved reading and spent many hours relaxing in his favourite chair. He was an avid football and baseball fan. He could be seen in the community, volunteering for the community centre and the church in La Salle.
The Funeral Mass will be celebrated at 10:00 a.m. on Monday, September 9, 2019 at the Christ The King Church, 847 St. Mary's Rd., Winnipeg, MB. Father Kevin Bettens presiding.