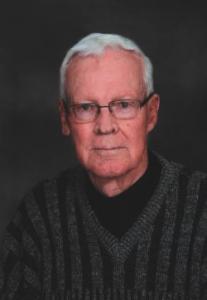 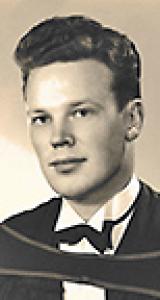 Arnie Barr passed away peacefully at the age of 94 on September 7, 2019.
He will be greatly missed by his loving wife of 67 years, Marnie Barr (Wishart); his children, Stuart Barr (Karen) and Lynn Barr, and his sisters, Ivella Minor and Allison Hilton. He was predeceased by his parents, Milton and Thora Barr, and his sister Marjorie Forsyth.
Arnie was born and raised on the family farm in Oak River, Manitoba where he attended the regional school. Following graduation from high school he enrolled in the Faculty of Agriculture and after two years he joined the Royal Canadian Air Force and was selected for training as a navigator. After the war he returned to the University of Manitoba and received his Bachelor's Degree in Soil Science in 1947. He continued his studies receiving his Masters of Science in 1950 specializing in Soils and Geology.
In 1950 Arnie accepted a position with the Province of Manitoba in the Department of Mines and Natural Resources as a Surface Geologist. Over the next 38 years Arnie held a number of senior positions retiring in 1984 as Assistant Deputy Minister. After retirement Arnie served for 11 years as a commissioner with the Clean Environment Commission.
Arnie and Marnie moved to their acreage at Portage la Prairie after he retired where they lived for 12 years. Arnie was active in the Portage Rotary Club, Trinity United Church and the Portage Golf and Country Club. In 1995 a move was made to their condo along the Boyne River in Carman, Manitoba where he was very active in curling, golf and The Active Living Centre. He loved golf and curling and was a happy member of the Strathcona Curling Club, The Wildwood Curling Club, Portage Golf and Country Club and the Carman Golf Club. They went on many vacations over the years. They explored Europe on several occasions and for many years made regular trips to Westlico, Texas, Palm Springs, Victoria and Osoyoos, BC.
He was a man of kindness and love and was very devoted to his family and friends.
Respecting Arnie's wishes, a private family service will be held at a later date.
In lieu of flowers, donations may be made to a charity of your choice.