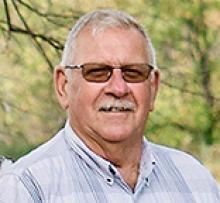 It is with broken hearts that we announce the passing of our husband and dad, Harry Clifton Peirson. Dad passed away at Boundary Trails Health Centre at the age of 63, with his family by his side.
Dad will forever be missed by his wife Bernadette, better known as Buddy, daughters, Candice (Geoff) and Colette (Jason), grandchildren, Chloe, Ethan, Madelyne, Oren and Piper, four legged companion Ranger, brothers, Walter (Bev), Ashley (Kathy) and Murray (Sherry), sister Valerie (Darcy), sisters-in-law, Marguerite and Anna (Terry), numerous nieces, nephews, and many friends.
He was predeceased by his parents, Harry and Barbara, stepdad Alex, in-laws, Louis and Corrine Tardiff, niece Katherine, sister-in-law Lilian, and brother-in-law Jimmy.
Dad was born in Roland on March 22, 1956 and was raised on the family farm NE 3-5-4. He attended elementary school in Roland and high school in Carman until the passing of his dad in 1973. Dad was a farmer, worked construction, and drove semi.
Dad and Mom were married May 23, 1981. Candice Michelle was born October 9, 1981 and Colette Liane, February 28, 1983. They enjoyed camping, working on the farm, and time with friends and family. Dad moved to Fort McMurray in 2003 where he worked for Thompson Brothers Construction. Mom joined him a few years later. They worked hard and made lasting friendships with those they worked with. Manitoba called them back home when Dad had his hip replaced in 2015. He was a new man, and free of pain, which allowed him to enjoy the things he loved including gardening, woodworking, and his five precious grandchildren.
On May 6, 2019 our worst nightmare was realized when Dad was diagnosed with stage 4 lung cancer. Dad fought with everything he had, unfortunately losing his battle six short months later.
Cremation has taken place and a Celebration of Life will be held November 10, 2019 at 1:00 p.m. at the Miami Community Centre.
Memorial donations may be made to CancerCare Manitoba or the Cystic Fibrosis Foundation.
The family would like to thank Dr. Dhaliwal, Dr. Paul, Dr. Leylek and Dr. Bashir all from CancerCare in Winnipeg, Dr. Martin, Dr. Dhala, Dr. Roberts, Cindy Funk and Shannon Reimer from Boundary Trails Health Centre, Dr. Jessica Beatty from Via Natural Medicine in Winnipeg and Dr. Nicole Krapp from Refined Health in Roland for the compassionate care that Dad received. Special thank you to Dr. Persson and nurse Krystin who cared for Dad the night he passed away. We would also like to thank the numerous friends and family that visited, texted, called and supported us the last six months. The kindness and love has been overwhelming and has helped us during a very difficult time. We are forever grateful.