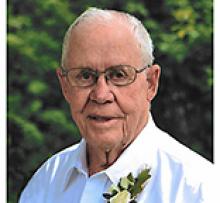 Peacefully on Tuesday, November 19, 2019, at home, Robert McIntosh aged 92, of Carman, passed away. His wife, Ida, of 65 years was by his side.
Grandpa Bob will be forever missed by his wife Ida, daughter Debbie (Ron), son Glen (Pam), and grandchildren, Kyla (Brett), Janel, Carlin (Matt), Derek (Leigh), Tyra (Derrick) and Sean (Stephanie), along with 11 great-grandchildren and many nieces and nephews.
Dad was predeceased by his three older sisters, Margaret, Thelma and Noreen, and one older brother Ivan.
Dad was raised in Graysville and married Ida Johnston June 5, 1954. They settled on the now family farm and lived there until moving to Carman. Dad was a forever farmer. He and Mom checked the crops weekly. Dad's plans were to drive to the farm on Wednesday of this week to ensure the corn was done.
Dad was an avid Jets and Blue Jay fan. He also enjoyed the lower levels of hockey by watching the grandchildren play and in later years the great-grandkids. Dad and Mom enjoyed 25 years of travelling south to Weslaco, Texas. Many great gold games and social events occurred during this time.
Cremation has taken place and a Celebration of Life was held on November 22, 2019 at the Carman United Church.
Memorial donations may be made to the Heart & Stroke Foundation, 1379 Kenaston Blvd., Winnipeg, MB R3P 2T5.