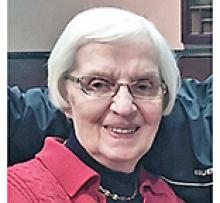 Jessie Anne Neufeld (nee Cornelson) was born on September 29, 1932, in Deloraine Hospital, to Peter and Tina (Neufeld) Cornelson. Her parents farmed in the Boissevain and Deloraine areas, where she grew up with brother Edward and sister Mary. She attended East Lynne and Royal rural elementary schools in the Boissevain area and graduated from MCI (Mennonite Collegiate Institute) in Gretna in 1951. That same year she was baptized on her confession of faith and joined the Whitewater Mennonite Church.
Jessie married Peter Neufeld in 1954. Their first daughter, Wendy, was stillborn in 1956, followed by the arrivals of four healthy children: Tenley (Herman Dyck) of Boissevain, MB, Tannis Nostedt (Kevin Lillijord) of Wawanesa, MB, Rocky Neufeld of Canora, SK and Velvet (Dale Sulymka) of Winnipeg, MB.
Jessie and Peter farmed near Boissevain until 1994, when they retired and moved to Winnipeg. Following Peter's passing in 2010, Jessie moved to Victoria Landing, Brandon, in 2015. Her retirement years were filled with love, laughter and spending quality time with her children, grandchildren, neighbours and friends.
She was hospitalized on September 3, 2019 in Brandon Regional Health Centre, followed by stays in Baldur Health Centre and Wawanesa Palliative Care. She passed away on Friday, November 22, 2019.
In addition to her four children, she is survived by four grandchildren: John Nostedt (Alicia Elliott), Jordan Nostedt (Sarah Farrow), Sterling Nostedt (Taylor Ledingham), Jada Roser-Dyck (Hannah Roser-Dyck) and one great-grandchild, Aspen Nostedt. She is also survived by her sister Mary (Bernie Nikkel), and sisters-in-law, Alice (Edward Cornelson), Agnes (Vern Fast) and Sadie (Abe Neufeld).
Jessie was predeceased by her parents, second mom, Anne Cornelson (Neufeld), daughter Wendy, husband Peter, brother Edward Cornelson, and son-in-law, J. Sheldon Nostedt.
Mom's hobbies included knitting and she provided countless baby sweaters for infants at the Grace Hospital in Winnipeg. Further evidence of her compassionate heart were her many hours of volunteering at the Voyageur School. She found great joy in these activities. Mom's kind nature was an inspiration to many, and she will be remembered for her strong faith and gracious hospitality. She will be lovingly missed by her family who always came first in her life.
Our family wishes to express our heartfelt and sincere thanks to the staff at Victoria Landing in Brandon, as well as the staff in Brandon, Baldur and Wawanesa health centres for the exceptional care Mom received.
The memorial service for Jessie Neufeld will be held on Monday, December 9, 1:00 p.m. at Trinity United Church, Brandon, MB, with Rev. Doug Neufeld officiating. Private family interment.
If friends so desire, donations in Jessie's memory may be made to: Mennonite Central Committee (MCC), 134 Plaza Drive, Winnipeg, MB R3T 5K9; Wawanesa Palliative Care, Box 309, Wawanesa, MB R0K 2G0; or a charity of one's choice.

Online condolences can be sent to the Neufeld family by visiting www.willmorchapel.com

Online condolences can be made to
the Neufeld family by visiting www.willmorchapel.com

Jamieson's Funeral Services of Glenboro
in care of arrangements. 204-827-2480