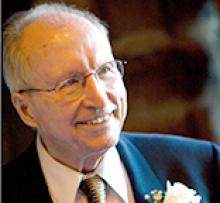 It is with great sadness that we, the family of Harold Gordon James "Jim" McGinn, announce that our beloved husband, father, grandfather, great-grandfather, brother and uncle, died peacefully January 6, 2020, surrounded by loved ones. He was 97 years of age.
Jim will be lovingly remembered by his wife of 62 years, Frances Cecilia McGinn (née Vickers); four children, Joseph P. (Jeanne), Gregory J. (Jenny), Kathleen M., and Jacqueline A. (Pierre); eight grandchildren, Ryan (Vanessa), David, Laura (Jason), Sarah, Elyse (Matt), Clare, Jacques, and Madeleine; two great-grandchildren, Tyson and Thomas; brother Joseph McGinn; sister Jean Currie; and many nieces and nephews. He was predeceased by his parents, Frederick and Kathleen (née Doyle); and sisters, Marguerite Duchesne, Kathleen Holland and Dorothy Murphy.
Jim was born in Calgary, Alberta in 1922, and with his five siblings, was raised in Moose Jaw, Saskatchewan. After he graduated from high school, Jim served in the Royal Canadian Air Force during the Second World War. He earned a Bachelor of Commerce degree from Thomas More College at the University of Saskatchewan, and a Master of Business Administration degree from the University of Western Ontario. He worked for the Canadian Pacific Railway for his entire career and was a dedicated member of the St. Ignatius Parish, the Knights of Columbus, and many civic organizations.
He lived a splendid life of devotion to his family, his faith, and the community. Jim's family was his passion, and his grandchildren will remember happy hours spent in family soccer games, barbeques, and evening card games. His family will continue to cherish the stories he told of his days on the ranch, on the railroad, and on the many trips he and Frances enjoyed after retirement. A profound advocate for education, Jim supported and mentored the generations that followed him by encouraging their life dreams and desire to learn. Whether they met him at the swimming pool, on a church committee, or in the Rotary or Serra Clubs, friends will remember Jim as a man of principle with an unerring moral compass. His compassion and his sense of humour animated every interaction. As his brother Joe said, people enjoyed being with Jim, and when they left his company, they were better people for having known him.
The Funeral Mass will be celebrated at St. Ignatius of Loyola Catholic Church, 255 Stafford Street (at Corydon), Winnipeg, MB at 11:00 a.m. on Saturday, January 11, 2020, with a reception to follow in the parish hall.