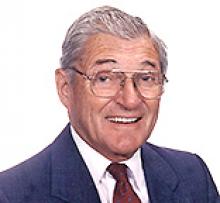 With sad hearts and wonderful memories, we announce the peaceful passing of our husband, dad, grandpa and great-grandpa at the Carman Memorial Hospital on January 24, 2020, with his family at his side. We are thankful his stay in hospital was short, and grateful his was a life well and truly lived.
Don was born in Saskatoon and moved to Carman at the age of three. And, Carman was his home for the rest of his almost 95 years.
Predeceased by his parents, Clarence and Winnifred; sisters, Dorothy Mason, Margaret Ayers McElvy and Marjorie Rockey.
Survived by his wife of 72 years, Donna (Nichol); children, Valerie (Grant) Sissons, Greg (Carol Bellringer) and Sandra; grandchildren, Scott (Hollie Hatt-Sissons), Donald, Sarah and Alex Doyle, Mike (Jenn) and Rob (Kim Elke) Moyer; great-grandchildren Alex, Mackenna, Nova, Kennedy, Logan and Austyn.
Don was a unique individual, "one of a kind". He quit school early to start his formal training to join the family business. He was the third generation, following in the steps of Albert and Clarence, to operate Doyle's Funeral Home. At 15 years of age, he trained in New York at the McCallister School of Embalming, and at the morgue of Bellevue Hospital. Don took over the business in 1952 after his father's death. Doyle's was sold in 1971, but the name remains to honour the family who founded it. And though he sold the business, he continued to work at several funeral homes across the province. In fact, he was still helping out the "guys" until his 90th birthday, often at the request of families who remembered his smile and friendly, caring manner at a relative's funeral in years past.
For him, the hardest part about being an undertaker was dealing with the deaths of children and friends. It may not have been the profession he would have chosen, but, being the only son, the expectation was there, and he fulfilled that expectation to the very best of his ability. In 2010, he was presented with a Lifetime Appreciation Award from the Manitoba Funeral Service Association in recognition of being a licensed funeral director for 70 years. Such an accomplishment.
Though he did love his work and the personal interaction and compassion he provided to families in their time of grief, anyone who knew him knew that his true passions were hunting and fishing. He would have been an exemplary outdoor guide. A true sportsman. To Don, heaven on earth was at the "lake". From his honeymoon in 1947 to every wedding anniversary up to their 68th, Don and Donna were at Clearwater Bay. Forever embedded deep in their hearts.
The family would like to express their heartfelt gratitude to all the staff of the Carman Hospital for the caring, professional treatment provided to Don; to the many, many friends who stopped by for a visit (and Don loved to visit); and most especially to Craig Johnston and Mark Reimer of Doyle's Funeral Home for their guidance, compassion, assistance and friendship.
Funeral service will be held at the Carman United Church with Reverend Harold Kenyon officiating on Tuesday, January 28, 2020, at 2:00 p.m. There will be a private family interment at the Greenwood Cemetery, Carman.
In lieu of flowers, Don requested that memorial donations be made to the Boyne Valley Hostel Corp (Capital Fund), Box 1644, Carman, MB R0G 0J0.

"May the road rise to meet you, and the wind always be at your back, and the rains fall softly on your fields. May God hold you gently in the palm of His hand."