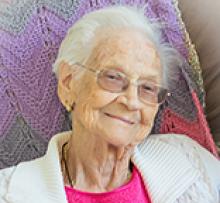 On Friday, January 3, 2020, Muriel Doerksen, of Carman, passed away at Carman Hospital, surrounded by her family.
Muriel will be forever missed by her son Dennis Doerksen, daughter Diane Duncan (Ron), daughter Joanne (Darren) Gunn, and daughter-in-law Norma Doerksen. She is also lovingly remembered by grandchildren, Jeff (Linda) Doerksen, Brad (Lisa) Doerksen, David Doerksen, Shannon (Dave) Paquin, Mike Doerksen, Jason (Sue) Doerksen, Marnie Doerksen, Chris (Treena) Doerksen, James Gunn, Krista Gunn and Mitchell Gunn (Emily), as well as 18 great-grandchildren and five great-great-grandchildren, numerous nieces and nephews, and many friends.
Muriel was predeceased by her husband of 60 years, Abe Doerksen (2001), son Garth Doerksen (2006), son Blake Doerksen (2017), son-in-law Mike Duncan (1992), daughter-in-law Marlene Doerksen (2019), brother Ted Owen (1974), sister-in-law Myrtle Owen (2010), and brother Jack Owen (1995).
Muriel was born and raised in Graysville, MB. In 1940 after they married, she and Abe lived in Regina while he served in the Air Force. Following that they purchased a farm in Stephenfield, MB, where they raised their five children and lived for 34 years. Muriel fulfilled a dream of working in the healthcare field when, in 1972, she became a Registered Nurse's Aide and worked at Boyne Lodge in Carman for many years.
Muriel cherished her time spent with all her grandchildren over the years. She was a faithful member of Graysville United Church, and then Carman United Church when they moved to Carman. She was also a member of the UCW, and the Carman Legion. Muriel was also very active in the community, and always stepped up to care for her family, neighbours, and friends.
A service of the celebration of Muriel's life will be held Saturday, February 8, 2020, at 2:00 p.m. at the Carman United Church.
The family would like to extend our appreciation to all those who cared for Muriel over the last few years: home care, and the staff of Boundary Trails and Carman Hospital.
Donations in memory of Muriel Doerksen would be appreciated to: The Carman HandiVan Corporation, Box 1294, Carman, MB R0G 0J0 or Boyne Valley Hostel Corporation, Carman Memorial Hospital or Crohn's & Colitis Foundation.