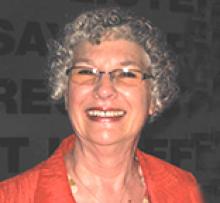 Bonnie was born in Minnedosa, Manitoba, in the summer of 1942. Her father Alfred (Alf) Strachan was the Agricultural Representative there at the time.
In early 1943 Alf and Nina, her mother, moved to Carman, Manitoba, to buy a farm on the edge of Carman and help Alf's father, John Strachan, with the Strachan Seed Company. Alf raised pedigreed seed crops, sheep and pigs.
Bonnie learned at an early age to do chores and show prize animals at fairs. She was one of the first girls to show pedigreed stock at country fairs as her father was ill one summer.
At the age of nine her mother and sister contracted polio so Bonnie became the housekeeper and the farmhand assisting her father in their farming operations. By her early teenage years she could throw bales as well as anyone, drive tractors, combines or slop the hogs as well as anyone. She worked in the Strachan Seed Company store each spring in downtown Carman, amoungst other things cutting out thousands of potato eyes of potatoes for seed sale.
Bonnie was a shy child and as she grew up she would rather do the work behind the scenes than stand out front and be seen.
She managed to put her time in at 4-H during all of this showing her own cattle and chickens at country fairs. She volunteered at the Carman Fair since she was very young, working mainly in the display building and the dining hall. She had been the head of the dining hall for many years. She had served on the board of the Dufferin Agricultural Society for many years and had a life membership in that organization. She had also been awarded the Dorothy Lucking Award for her dedication to the Carman Fair.
She had volunteered with the Carman Health Auxiliary for many years and served as Treasurer for them. The Health Auxiliary raises funds to augment the addition of medical equipment, furniture and redecorating at both the Carman Memorial Hospital and the Boyne Lodge in Carman.
Music was her forte. She was an excellent singer and sang for the Tudor Bowl in Winnipeg and had her grade ten singing. She taught children and adult singing lessons for many years. She had sung in several choirs including the Carman United Church choir since she was eight years old and the Sonatrice singers for over 40 years. She had sung at many weddings over the years. She and her sister Della used to perform Scottish Highland dancing at variety concerts at the Memorial Hall Theater in their younger years.
She volunteered with the Carman Band Boosters at the Carman Collegiate for several years. They raised funds for the Carman Collegiate Senior band.
Bonnie met Charlie Froebe in the summer of 1961 and their first date was at the Carman Fair when Bonnie finished working in the display building. They were engaged the next year and were married on Halloween, 1964. They moved into their little flat roofed house in Homewood and began their married life together. She helped on the farm, taught singing lessons to kids and adults, sang and directed the Homewood United Church choir, volunteered with the UCW and the Homewood Community Club. She also volunteered, and ultimately headed, the preparing of the oyster supper for the annual meeting of the Homewood Co-op.
Two daughters, Karla and Nikki, arrived keeping the family busy. Bonnie ran the house and she and the family helped run the farm. During Charlie's absences to many farm meetings they kept the farm running.
In the Carman United Church Bonnie had volunteered with the Sunday School, with the choir and has worked at the Fall Suppers for as long as anyone can remember and had headed up the "pick up and take out" for the fall supper for more than 30 years.
She was an integral part of setting up the "Canola Cash Advance" for the Canadian Canola Growers with Charlie in the early 1980s. Both she and Charlie ran the program without any remuneration for several years until the program got established. She continued to work on the cash advance until their retirement in 2000.
In retirement, Bonnie and Charlie continued to volunteer, travel and support their family and friends, always busy. Bonnie will be deeply missed by her husband Charlie; daughters, Karla and Nichole; grandson Beren; sister Della Heaman; and brother Neil Strachan; and their partners; and all the rest of her family; and their many friends.
Funeral service will be held on Monday, February 10, 2020, at 2:00 p.m. at the Carman United Church.