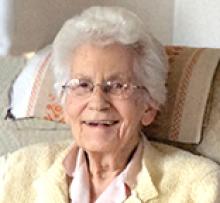 Alma Grace Carson (nee Long), 98 years of age, passed away with her children at her side, in her home, on Tuesday, March 24, 2020.
Alma grew up in Surrey, England and immigrated to Canada in 1948 to marry Albert Carson, whom she had met several years previously when he was stationed in England at the end of the Second World War. They farmed together at Thornhill until they retired to Roland in 1978.
In England Alma had a career as a tailor's apprentice. When the war began she started working at Secretts Market Garden in the Women's Land Army. While farming at Thornhill she was active in 4-H, teaching many girls how to sew. She always had a beautiful garden, and was always involved in her local Horticultural Society. She was also involved in all aspects of her local United Church.
Alma was predeceased by her husband, Albert (1980); her sister, Beryl Long (2017). She is survived by her three children, Dennis (Christine), Valerie (David), Sherril (Jeff); 11 grandchildren; and nine great-grandchildren.
We would like to thank home care, CancerCare, Dr. Kruk, and her many friends in the community for their care over the years and during her recent illness.
A private family interment will be held in the Fairview Cemetery, Roland.
Memorial donations may be made to Boundary Trails Palliative Care, or to Boundary Trails CancerCare, Box 2000 Station Main, Winkler, MB R6W 1H8.