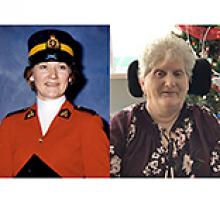 Ruth was born to Peter (deceased 1979) and Anne Enns (deceased 2013) of Wingham, MB. She was the eldest of seven children. Ruthie (or "Rudy" as Bob affectionately called her) was predeceased by her husband Robert (Bob) Charles Ray in 2002.
She is survived by her brother Dave (Linda) and daughters, Tracy, Vicky, Cindy, Kelly and their families; sister Kathleen (Jim) and children, Cory, Jeffrey, Jaclyn, Robert and their families; brother Ernie (Sherryl) and children, Carly, Travis, Misty, Jenaly and their families; brother Rob and his family; brother Jim (Diane) and children, Trevor, Brendon, Nicole and their families; sister Eileen (Tom) and daughter Tianna. Ruth is also survived by her Private companions Bonnie, Ray, Tanya and Hazel.
Ruth had a quiet gentle soul and yet she was one tough lady, willing to tackle anything. She handled every situation with grace and dignity, remaining "classy" at all times. At the age of 38, Ruthie quit her nursing career and moved in with a family in Quebec to learn French, so that she could apply to be a bilingual RCMP officer. She was accepted and started her training in 1985 at the age of 40, and at that time, she was the oldest woman ever accepted for training by the RCMP. Mom and the family were so proud of her, however it was the nieces and nephews who held the bragging rights. Ruthie married Inspector Robert (Bob) Charles Ray on February 14, 1987 at RCMP Depot. They enjoyed 13½ happy years together before her brain aneurysm took her down on August 15, 2000. Bob sat at her side for 644 days and then passed away from a massive heart attack. He literally died of a broken heart. Bob adored his "Rudy". The way he was looking at her in their wedding photo was exactly the way he felt about her until he died.
Two Celebration of Life services will be held once gatherings are permitted. One service will be in Carman, MB and her final resting place will be beside her beloved Bob at RCMP Depot in Regina, SK.
The Enns family would like to thank the residents and staff of the Carman Boyne Lodge for loving Ruth as part of their family. We will forever be grateful.
We rejoice that Ruthie is no longer suffering and is safe in the arms of Jesus.