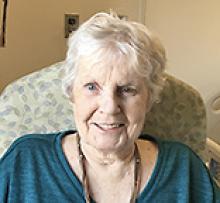 It is with heavy hearts that we announce the passing of Patricia Foley Bouchard on April 5, 2020, at the age of 83. We will be forever grateful that she was able to spend her last days at home surrounded by family, enjoying many visits with her children, grandchildren and great-grandchildren. Her loving husband George of 62 years was constantly by her side.
Her number one priority in life was always her family, the love of her life, George; children, Michelle Fitzmaurice (Ken), Janet Williams (Terry), and George Jr. ( Carla); grandchildren, Tyler (Mélanie), Rhys (Celina), Kelly (Bec), Kyla, Jesse (Becky), Danae, and Jordanne; and great- grandchildren, Lou, Sully, Lincoln, Leo and Zoe.
Pat will be joining her beloved grandmother Rose Alma, mother Blanche (nee Langevin) and father James Foley, who gave her the Irish heritage of which she was so proud. She will also join her older sister Jeannine and her daughter Jacqueline who both died in infancy. We know she was welcomed by so many more and that she will be watching over all of us from above.
Being an only child, she was blessed to be part of a larger extended family with very special cousins. Those connections lasted a lifetime, and she was graced with many nieces and nephews who loved Aunty Pat.
Pat met George, while at a family house party at Paul and Stella's. George was later transferred to Lynn Lake with Trans Air. Pat went for a visit, and it was then, that they decided they wanted to spend the rest of their lives together. They were married in 1957 in Lynn Lake by Father Lapalme who told them they were the first French descendents to be married in the North. The Langevins' celebrated with a mock wedding in Ste. Rose du Lac to mark the occasion.
Pat and George enjoyed many years raising Michelle and Janet in northern Manitoba. In 1967, they moved their family to Winnipeg to buy Degagne Motors and later sold it in 1990. They enjoyed all the benefits of being closer to family. With the birth of their son, George Jr. in 1974 they delighted in many new adventures. This included years at the Ochre Beach cottage where they enjoyed lakefront property beside cousins. Being at Ochre Beach was like going back home for Pat.
In 1981, they built a cottage in Buffalo Point where they made many new friends and continued their family connections. Buffalo Point was home for many years and the place everyone learned to fish and embrace lake life.
More recently, Pat and George made Winnipeg their home once again, making visiting with their children, grandchildren and great-grandchildren easier while keeping Maime at the centre of all the action. She spent hours making crafts with them and she never tired of holding the little ones in her lap. They all brought smiles to her face every time they entered the room.
You could feel her love in every salmon sandwich, every batch of cookies, her Maple Walnut Chiffon cake, her fishing derby chili, and even more so in her every smile. Pat was known for her love of decorating and attention to detail. She taught us all how to cook; how to sew; even how to catch a master angler; but more importantly, how to care; how to listen; how to be strong; and, how to be compassionate.
Pat and George shared a deep belief in their Roman Catholic faith, and they were always ready and willing to serve their community. Together, their service and fellowship with the St. Francis Mission Circle Group was a very special part of their life and they developed many lifelong friendships throughout the past 50 years.
In lieu of flowers, if family or friends so desire, a donation may be made to the Alzheimer's Society of Manitoba.
A celebration of her life will be held at a later date.