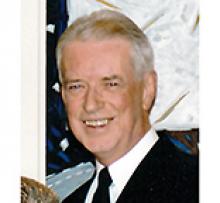 Suddenly on April 8, 2020, due to a ruptured aneurysm, Bob Young, aged 78, of Souris, Manitoba, passed away at home with his wife Maureen by his side. Bob was born in Winnipeg, Manitoba January 1, 1942.
He was predeceased by his father Robert, his mother Noreen and his only brother Tom. He leaves to cherish his memory, his wife Maureen of 52 years; daughters, Elizabeth (Clayton) and Roberta (Jayson); his sister-in-law Diane, and four beautiful grandchildren, Gracian, Sydney, Angus and Logan.
Bob had a very good and happy life. He worked his young and teenage years as a paper delivery boy and a soda jerk. He was also in the Air Force Cadets where he was a drummer in the band and where he also got his love of Second World War aircraft. After school he spent a number of years working with the Royal Bank before meeting Maureen in 1967 and then marrying her in 1968. They moved to Norway House, Manitoba and managed the airbase which was float planes and barges. In 1970 they moved back to Winnipeg and Bob worked for Gordon Hotels, managing many properties including Selkirk, the Curtis and the Montcalm. He left the hotel business in 1973 and he and Maureen moved to The Pas to help his father manage his Allied Trucking Agency until it was sold in 1977. The bug of the hotel business was in his blood and the family moved to Saskatoon and managed the Patricia Hotel. He and Maureen purchased the Souris Motor Inn in 1982 and operated and managed it until retirement in 2009. Bob loved the hotel business and loved the town of Souris and the people in it. He made many friends and acquaintances along the way. He spent many hours talking and engaging with people and enjoyed every minute. He received his Hotel Administrator designation from American Hotel and Motel Association in 1991 and sat on the board of directors for the Manitoba Hotel Association for many years before becoming the chairman of the board in 2000.
The cabin at Pelican Lake which was purchased in 1995 became his heaven on earth and all free time was spent at the lake snowmobiling or boating. The lake people, as he fondly called them all became new friends and he had a special place in his heart for all of them. His two daughters were the center of his life and he celebrated their achievements with much love and pride. When his two sons-in-law entered the family and then four grandchildren, he was over the top. Bob was known as a good story teller and they were all true and based on his life experiences. It was a good journey.
A special thank you to Dr. Cram, EMS staff and Kowalchuk's Funeral Home. Their caring and empathy are second to none.
In memory of Bob, donations may be made to the Souris Health Centre, c/o Prairie Mountain Health, P.O. Box 10, Souris, MB R0K 2C0.

Expression of sympathy may be made at
www.kowalchuks.net