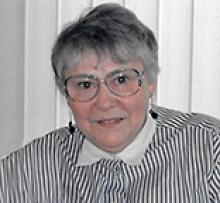 Mary Hochkevich (nee Zerebeski), age 87, of Winnipeg, Manitoba peacefully left us on May 7, 2020, after a brief stay at the Middlechurch Home of Winnipeg.
Mary was born to Maria and Nicholas Zerebeski on June 20, 1932.
She was raised in Atikokan, Ontario, where she met and married Walter on February 26, 1949. The newlyweds relocated to Manitoba to start a long married life and raised their three children on their family farm in St. Andrews. Mom worked hard all her life; on the farm, for many years in a sewing factory, and during the years she was employed at St. Amant Centre as a Cook. Mom was our "Glue", holding us all together over the years, making sure we knew our Ukrainian and Polish traditions. Baba would make perogies, a hundred dozen each day, to fill our freezers, and made cabbage rolls and insisted that you were never hungry when you left her home. Mom loved to sew and our wardrobes were made with love. We were so blessed to have her for our Mom.
Mary is survived by her children: Sharon (Craig), Lauren (Ken) and Gordon (Irene); grandchildren, Robin (Dave), Dustin (Crystal), Cole, Luke, Buddy (Hanna), and Justine; great-granddaughters, Heidi and Holly; two sisters, Anne and Lil (Roy); and many nieces and nephews.
Mary was predeceased by her loving husband Walter (2012); brothers and sisters- in-law, Bill (Ann) and John (Edie); sister and brother-in-law Betty (Harry); brother-in-law Ray; brothers-in-law and sisters-in-law, Martin (Angie) and Victor (Nellie); and sisters-in-law, Ann, Katie and Agnes.
Cremation has taken place. Mary's ashes will be laid to rest with Walter at Brookside Cemetery, Winnipeg, MB. No funeral service will be held. A family gathering will be held at a later date.
Dad had promised Mom that he would be waiting at the first bench for her in Heaven.
He has been waiting for eight years, Mom often said he was not patient and that she was sure this was a real test for him. They are together again.