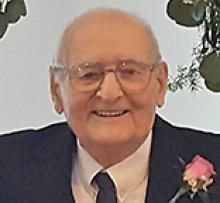 It is with great sadness that we announce the passing of our father, grandfather and great-grandfather, who left us peacefully on May 13, 2020.
Charles was born on January 12, 1928, in Ste. Rose du Lac, Manitoba. He married in 1952 and spent most of his life in northwestern Ontario where he was self-employed in the trucking industry. He later retired to Winnipeg, living in St. Boniface.
He enjoyed fishing and hunting and family gatherings. He was always there to cheer his daughters on in baseball and curling, and later was cheering at his grandchildren's sporting events as well. Family gathering were important and always included cribbage games. He was always smiling and full of cheer and jokes, and enjoyed his daily coffee with his buddies. He was also willing to help out others with his years of experience. He will be missed.
He was predeceased by his wife Lucille (nee Comeau); his parents, Henri and Albertine (nee Mongrain); two sisters, Berthe and Cecile; and brother Frank.
He is survived by daughters, Jeanne, Paulette and Denise (Guy); grandchildren, David, Joe, Merlyn, Danielle (Casper) and Charles (Kimberly); two great-grandchildren that he loved to watch playing; brother Joseph (Yolonde); sisters, Madeline, Marie Rose, Leona, Rolande, and many beloved nieces and nephews.
A funeral service will be held at a later date.