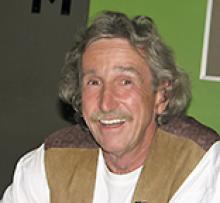 With deep sadness, we announce that Robert left us on Tuesday, May 5, 2020, while listening to the Eagles, "Hotel California". Dearest friends, Daxx and Tammy, were miraculously able to hold his hand at the end. His sister, Sharron (Danny), and lifelong friends, Harvey (Shelley) and Terry (Janet) were also present spiritually.
He faced many struggles over his 67 years, and fought fiercely to overcome them. We always teased him that he was like a cat, using up at least nine lives.
Robert was preceded by his loving mother, Sally; and his dear Aunt Delores, who he was very close to. He has now reunited with these angels.
Robert also leaves behind a great group of loved ones and great friends, who have always been by his side through the years. They include Natina, Kathy, Sierra, Lynnea, Kevin and Mello, Shane and Rachelle, just to name a few. He had a way with all the kids, they loved playing with him. He was known to them as Mr. Orange, and he will always be remembered in their hearts.
Robert had a lifelong love for his animals, especially his dog, Atila. He was very much a people person, and one of his great passions in his life was his love for working with people in the service industry. Some of his greatest memories were working alongside Harvey at many of his restaurants throughout the years. He also had a great love for music, cooking, and the ladies.
Robert had a very kind and giving heart, which anyone who was blessed to know him could attest to.
Born to be wild, and always a jokester, he dreamed of riding into the sunset on his vintage Indian motorcycle.
We would like to extend heartfelt thanks to the St. Boniface ICU medical team for their exceptional care over his last three weeks. We would especially like to thank them for the daily virtual visits, connecting our hearts to Robert from our homes outside of Winnipeg, Vancouver, and wherever Terry could pull over in Western Canada.
We also wanted to thank LeClaire Brothers Funeral Home for their support during this time; we really appreciate all you have done to help us through this process. You guys have taken such a difficult time and helped to make this such a peaceful experience.
No service, by request, but we will celebrate his life at a later date.

We miss you.
"Safe in the arms of Jesus"