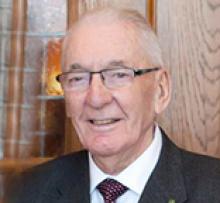 Our dad, Garnet (Garney) D. Kissick was born Sunday, July 8, 1928, in Letellier, MB and peacefully passed away in Carman on Thursday, June 25, 2020, at the age of 91.
Dad loved life and leaves to celebrate that life his four sons: Ken (Julie) of Lethbridge, AB, Dennis (Debbie) of Winnipeg, Murray (Monique) of Thompson, and Roger (Diana) of Carman, 12 grandchildren and 17 great-grandchildren. Dad also leaves his second wife of 21 years, Wilma.
Dad was predeceased by his first wife Beth, his parents, David and Eva Kissick, and his brother Vic (killed in action March, 1943).
Dad met Mom, Beth Wood, at a party in Winnipeg and they were wed June 24, 1950 and remained happily married for 46 years until her passing in 1996. Dad and Mom moved to her family farm in Miami in March of 1951, supposedly only until after seeding. Dad finally left the farm 57 years later when he and Wilma moved to Carman.
Dad had a very full life. He was employed as a tire repairman, a milkman, a telephone lineman, heating fuel delivery driver and a bartender. He was self-employed as a farmer, a logger, a bulk fuel agent for ESSO and his pride and joy - G.D. Kissick Construction which he operated for 41 years before retiring in 1994.
If work wasn't enough Dad somehow found time to coach hockey, be a founding committee member of the local Cubs and Scouts where he started as Akela, became Scout Master and served on the Boys Scouts District Council, serve as a councillor for the R.M. of Thompson, and be an active member of the Carman Legion where he held most of the executive positions at one time or another.
Dad's recreation included playing hockey, snow-skiing (how he met Mom), water-skiing, camping, dancing, golf and his favourite pastime ... puttering.
Dad's greatest pleasure, however, was watching his four boys grow and develop into successful family men, making their own mark on the communities they live in.
The family wishes to thank the staff of Boyne Lodge for their care and support of Dad especially during his final days.
Due to Covid-19 restrictions the family held a private interment on Wednesday July 1, 2020. A Celebration of Life will be held at a more appropriate time.