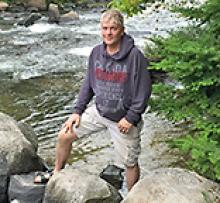 Sadly, Rolf passed away in Riverview Health Centre, at the age of 49.
Rolf was predeceased by his father Herbert and sister Frieda. He is survived by his partner Lynn, mother Waltraut, brother Joachim (Lena), and family in Alberta, British Colombia and Germany, as well as many friends and co-workers.
Rolf was a Red Seal Chef known for making exquisite meals that impressed all. He began his love of food as a culinary student in 1986. He participated in numerous culinary competitions and various fundraisers. He worked as a cook, sous-chef, chef, owner and operator, bar and service manager, executive chef and was the creator of many restaurants throughout his career. He had several 5-star reviews and was locally recognized as a hard working and reliable chef. He worked tirelessly with passion and dedication, ending his career with Via Rail.
He loved nature, camping, fishing and travelling. Rolf will be remembered for his generosity, charisma and willingness to always lend a helping hand to anyone in need. He will be greatly missed by all those whose lives he touched.
Flowers gracefully declined. Donations in honour of Rolf may be made to the:


A private graveside service will be held by invitation only.