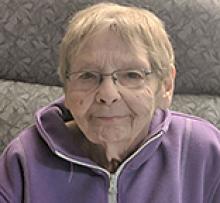 Shirley passed away peacefully on July 27, 2020 with her husband George by her side. She had battled dementia for the last several years.
Shirley was born in Morris, MB on November 6, 1945 to Edward and Rose (nee Clairmont) Fillion. She was raised in Fort Garry. After high school, Shirley worked at Great West Life until she became a stay-at-home mom.
Shirley married George on July 17, 1965 and spent the next 55 years together side by side, except for the last year and a half when her illness prevented her from being able to live at home.
Shirley and George started their family in Winnipeg and then moved to the farm in Sperling. It was quite the adjustment for a city girl to live in the country, but she worked hard to maintain the yard and garden and always had a hot meal waiting at the end of the day for her family. In her spare time, she enjoyed doing solitary activities like word puzzles, watching afternoon soap operas, and reading novels.
Shirley is survived by her husband George, and their children and grandchildren: son Trevor (Jo-Ann), Zachary (Breanna) and Joshua; daughter Karen (David), and son Curtis (Rena), Chanese, Keringten, Jeremy, Cassandra, Cheyanne, Mervin, Ashley, Brody, Michael and Lucas. She is also survived by her brother Alfred.
She was predeceased by her parents, Edward and Rose, sister Edna, and brothers, Edgar and Norbert.
A private service will be held at a later date.
In lieu of flowers, please consider a donation to the Boyne Valley Hostel Corporation or the Alzheimer Society of Manitoba.
Thank you to the staff at the Boyne Lodge for taking such good care of Shirley and for making sure her last days were comfortable.