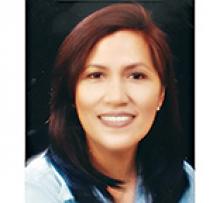 After a courageous battle with cancer, Gloria (Glo) passed peacefully at Grace Hospice, with family and friends by her side.
Gloria will be greatly missed by her husband Harold Hryniuk; sister Flora and brother-in-law Felix Ramos; and her lifetime friend, Sylvia Canlas. She will also be missed by her stepchildren, Robert, Jo-Anne and Sheila; great-granddaughter Ainsley; grandchildren, Dustin, Genevieve, Greggory, Tiggairna, Rachael, Broden and Mathew; nieces, Floreley (Meg), Maria (Matoy) and Joyce; nephews, Ariel, Marvin, Mario and Alfrado; and numerous friends throughout the world. She was predeceased by her parents, Sotera and Rafael De Paz and her sister Chit.
Gloria was born in Dasmariñas, Cavite, Philippines. She attended the Philippine Christian University; where she graduated and went on to pursue a singing career of nine years, which took her to various locations throughout the world, like China and Dubai. She later went on to work at Club Paradise in Palawan as a resort manager. During her visit with friends in Seattle, is where Gloria met Harold and fell in love. When she moved to Canada, Gloria pursued a career at the University of Manitoba, Faculty of Medicine, at the CLSF Facility, where she later acquired a position at the International Medical Graduate Program.
Gloria was an avid member of the St. Gerard Parish Choir, where she enjoyed many years of singing. In her free moments, she would be in her garden. She also loved cooking and fishing. She volunteered at Winnipeg Harvest and St. Gerard Parish and Gloria cherished her time spent with her many friends and family.
The family would like to thank the staff and nurses for their kind treatment and care they gave to Gloria during her time at CancerCare 3rd Floor and at Riverview Medical Center 3 East. And finally, thanks to the staff and nurses at Grace Hospice.
The Funeral Mass will be celebrated at 1:00 p.m. on August 22, 2020 at St. Alphonsus Roman Catholic Church, 315 Munroe Avenue, Winnipeg, Manitoba.
After Mass, there will be a Celebration of Life for Gloria in the Parish Hall, next to the Church. Interment will follow at a later date, at the Winnipeg Beach Roman Catholic Cemetery.