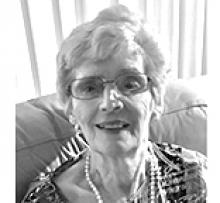 On August 18, 2020, Shirley Scott, beloved wife of Glen Scott for 65 years, passed peacefully at the age of 87 years. Glen predeceased Shirley in 2017.
Shirley was the mother of three sons, Douglas (Suzanne), Richard (Linda), and Garry (Tonya); grandmother to eight, and great-grandmother to four. Also, remaining to cherish Shirley are sister Marjory Gardner, sister-in-law Yvonne Scott; and a number of nieces and nephews.
Shirley (Neabel) was born in Minnedosa, Manitoba on October 17, 1932, and grew up on the family farm. In 1951 Shirley married Glen and shortly thereafter moved to Winnipeg. She was a devoted wife and mother, and enjoyed getting together with family. Throughout her life she enjoyed dancing and going to curling bonspiels with Glen, playing cards, bowling, bingo, and going to Blue Bomber games with friends. Shirley will be missed by her family and friends.
Interment will be held at Rosewood Memorial Gardens in Brandon, Manitoba.
In lieu of flowers, donations can be made to the Winnipeg Humane Society.