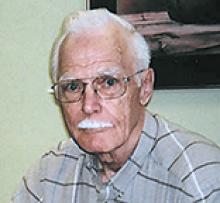 Family, friends, and associates this is my final farewell!
I grew up on the farm five miles south of Beatty, Saskatchewan and attended elementary school at Sweetwater School for grades 1 to 8 and Beatty High School for grades 9 to 12 followed teacher training at Saskatoon Normal School in 1947 where I obtained my teaching certificate. I taught grades 1 to 9 (35 children) at Willowdale School in 1947. I then became an employee of the Canadian Bank of Commerce and worked in branches at Melfort, SK, Prince Albert, SK, Lloydminster, SK, Kindersley, SK, Flin Flon, MB, Carman, MB, Watson, SK and Winnipeg, MB during the period 1949 to 1955. In 1955 I became an employee of The Great-West Life Assurance Company in Winnipeg and remained with this company until my chosen retirement in June 1987.
I enjoyed sports throughout my life with cross-country skiing, rollerblading and golf the main interest in latter years. Flying was a passion for many years after obtaining my flying license in 1967. There is nothing like the Prairies from three thousand feet with all the geometric patterns of the farm fields below.
I now rejoin Jean, the love of my life and wife of 54 years, in the great outdoors in the heavens above.
I am survived by my son Kerry and daughter-in-law Darlene.

So long you all, goodbye, au revoir
and aufwiedersehn!