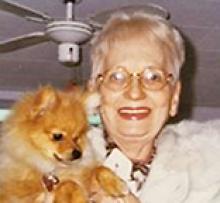 It is with heavy hearts, that we announce the passing of our beloved mother, grandmother, great-grandmother, auntie and friend, Dolores Olson.
She was predeceased by parents, Eddie and Hazel Bowen, and husbands, Paul Bigourdin and Doug Olson.
She leaves behind to cherish her memory, daughters, Corinne (Abe) and Sherry (Radar), and son, Jim (Carmela); grandchildren, Tia (Paul), Karen (Josh), Kimberly, Melissa (Chris), and Sara (Brett); and great- grandchildren, Cruz, Talia, Amira, Simon, Emmett, Quinn and Brody.
Mom was born and raised in the West End, where she lived with her parents, at her dad's barbershop on Notre Dame, later moving to McGee and Maryland St. Mom briefly worked at Eatons Audit, Pauline Chambers and The General Hospital prior to settling into her fulltime job at home raising her three children. Some of Mom's pastimes were reading, cooking and going for walks. She also loved singing and dancing, specifically the Red River Jig. Her love for country music was strong, with her favourite being George Jones. She attended many of his concerts and was even a part of his fan club!
In her later years, she moved to Petersfield and Selkirk, where she enjoyed the serenity of country living. Mom loved all animals; from her numerous dogs, to the blue jays and hummingbirds, she would feed up until her passing peacefully in her sleep.
Special thanks to her daughter, Sherry Voth, for the loving care she showed in the final days of Mom's life at her home in Clandeboye. The family would also like to thank, Dr. Donna Clark, Dr. Habtu Demsas, Palliative Care Nurse Melanie Bernas and Rock Fontaine for their compassionate care.