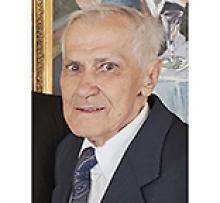 Claude was born on April 30, 1940, as the seventh of ten children. He grew up on the farm near Dunrea, MB and moved to Winnipeg at the age of 16. Claude met Irene Roy, and they married in 1963, and had two sons, Michel and Jean. Claude worked a few jobs before starting work at CBC. He also joined the Air Force Reserves serving at 17 Wing Winnipeg. It was at CBC that he met Cynthia Steinke, and after a long courtship, they married in July 1980. They lived in Brunkild, Cynthia's hometown, where Claude volunteered actively in his community. Claude welcomed daughter, Tiffany, in 1982 and son, Kurt, in 1984. Claude gained his CMA and worked as a "bean counter" for Revenue Canada. Claude retired from the CRA in 2005. He enjoyed traveling during his retirement and surprised Cynthia with numerous trips to Europe.
Claude will be remembered for his unwavering kindness and generosity to anyone who needed it, his sense of humor and quick wit, his incredible skills with computers, photography, HAM radio, and anything electronic, his inventive Halloween pranks and his outrageous bids during a good game of cards! Claude has gone to join his parents and four siblings in his eternal resting place.
To treasure his memory, he leaves his wife Cynthia, his children, Mike (Val), Jean (Vicki), Tiffany and Kurt, four grandchildren, five siblings, a large extended family and many friends.