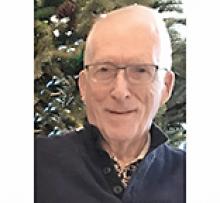 With profound sadness, the family of Barrie Sanders announces his peaceful passing at Salem Home, Winkler, MB, on Remembrance Day, 2020, with his son Ronnie by his side.
Barrie leaves to mourn his wife of 71 years, Lucille (nee Tessier); his three children, daughter Lynne Clark (Larry-deceased), their daughters, Jennifer (Marek) and baby Josephine, Brittany (Mayan) and Taylor, his sons, Paul (Daniel) and Ron (Sherry) and their children, Greg and Morgan (Mike), as well as several nieces and nephews.
Barrie lived his entire life in Carman. The second youngest of five children, he was predeceased by his sisters, Gwen Ralph and Ardith Francis and by his brothers, Paul and Blake. At the age of 20 he joined the Air Force and flew during World War Two. The planes were Avro Ansons, and PBY Canso flying boats. On a tour of the aviation museum in Ottawa a few years ago, he realized the Tiger Moth No. 7207 on display coordinated with the number in his aviation log book as one he had trained on so many years prior!
After the war, he attended the University of Manitoba, graduating in March 1950 with a degree in Pharmacy. His last year of studies he and Lucille lived in the pharmaceutical huts on campus with their infant daughter, Lynne. He then joined his father, E.M. (Milt) Sanders, owner of Sanders Rexall Drug Store in Carman, where they worked together for many years. Barrie sold the business in 1982 to Ken Stevens.
Fortunate to retire early, Barrie and Lucille did some travelling. A few winters were spent in Palm Desert, California. One notable trip was a golf excursion to Scotland where they played several of the historic courses and where they visited the grave of his older brother Paul whose plane went down over Scotland in 1942.
Barrie's love of flying carried on after the war and in 1973 he qualified for a private plane license and promptly bought a two-seater Aeronca, which he kept at the Carman Air Strip. Much to Lucille's chagrin, he would often fly low over their house and "wave hello" with the wings!!
He was an avid reader and became a regular at the Boyne Library. He had a keen interest in photography and devoted a section of the drug store to cameras and related equipment. He loved animals, especially dogs, and in his later years at home had great fun feeding peanuts to the resident blue jays or getting a chipmunk to eat out of his hand!
His biggest interests and talents though, were in the world of sports. He often had a game on the TV, especially if it was curling or baseball. When winters were spent at home, Barrie was a member of the Carman Curling Club. He kept at the sport till the age of 92 when he decided risk of a fall might mean it was time to put away the broom. In January 1994, he and his teammates made headlines after scoring an 8-ender…apparently no easy feat!!
Where Barrie's talents and passion really shone though, was on the golf course. Golfing from his teens until the age of 93, he absolutely loved the game. To describe all his achievements would be very lengthy indeed, so suffice it to say the trophies were many!! Highlights of his golf career would be:
Carman Golf Club Championships and
Past President
Manitoba Men's Rural Champion
9 consecutive years. 1980-1988…
and again in 1990
Manitoba Men's Senior Champion 1985
Member of Manitoba Provincial Interclub
Champions 1986 1988
Greyer Owl Champion six times
between 1983 and 1992
And probably his proudest moment…..
Grey Owl Champion 1977!!
The family would like to acknowledge and extend heartfelt gratitude to those who have helped Dad during his waning years. Thank you to staff at Carman Memorial Hospital, at Swan Lake Hospital, at Salem Home (Cottonwood Wing) in Winkler and especially to Marnie Fry and her staff of "In Good Hands", Carman. Their loving care, patience and compassion was wonderful!!!

Memorial donations may be made to Boyne Regional Library, Box 788, Carman, MB R0G 0J0.
A Celebration of Life will be held at a later date.