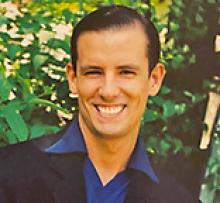 Bryan Ronald Peake, 50, of Winnipeg, passed away peacefully on December 13, 2020, after a lengthy illness.
Bryan was born on February 11, 1970, to Ronald and Judith Peake (nee Borland), in Winnipeg. He graduated from Glenlawn Collegiate in 1988.
Bryan was a racquet sport star from his teens, winning titles in badminton and tennis, following in the footsteps of his family.
He developed and ran a house and pet sitting business in Winnipeg for many years, HomeAlone. He had a green thumb and developed a beautiful garden at his family home.
Bryan was passionate about animals, had a fascinating variety of exotic pets, including reptiles, snakes, cats and dogs that he trained to licensed therapy level. He and his dogs volunteered countless hours with St John's Ambulance and Riverview Health Centre.
Bryan was predeceased by his parents, Ron and Judy. He is survived by his brother Riley Peake; niece Rosa; and nephew Lewis; and his dear friend Jim.
In lieu of flowers, donations to World Wildlife Fund would be heartwarming.