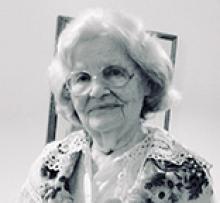 It is with immense sadness that we announce the passing of a great woman, Genevieve Franczyk Matkowski. Genevieve passed away on December 20, 2020, at Grace Hospital. She was 92.
She was born in a beautiful Legionnaires village in Poland, First Brigade, called Teklowka. Her journey began in Wolyn, Poland, and then took her to Siberia, then to Uganda, Africa, to England and finally Canada.
Genevieve was always very active in the Polish community and church. She received many honours and distinctions for her charity work and volunteering. She was a member of The Polish Canadian Women's Federation.
Genevieve was predeceased by her father, Wojciech Franczyk in 1942, mother, Rosalie Franczyk in 1987, brother, Karol in 1989, brother, Zdislaw in 2014, sister-in-law, Kazimiera in 2018, and her beloved husband, Stanley Matkowski in 1990 and precious daughter, Zaneta in 2009.
She leaves behind to mourn, her daughter Elizabeth Bannerman, son-in-law, Murray, three grandchildren, Dana Bannerman and his wife Cassandra, two great-granddaughters Chloe and Lyla, her granddaughter, Lana Bannerman Bender, and great -grandson Stephen Murray, her granddaughter Alexa Bannerman Miller and her husband Evan, as well as her brother Chester Franczyk and sister-in-law, Janet Franczyk.
Due to Covid 19 restrictions, funeral and Celebrations of Life will be announced in the future. It was Genevieve's wishes for everyone to remember to always show compassion and kindness to one another and always count your blessings.
A special thanks to Ewa Wadowska, for all the love, care and kindness that she bestowed upon Genevieve and everyone at the Polish Manor.

May you rest in God's Kingdom, my beloved mother.