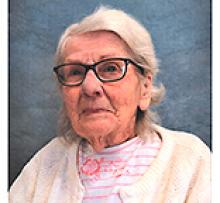 Our beloved wife, mother and (great) grandmother passed away peacefully on December 26, 2020, while in care at Meadowood Manor.
She is survived by, and will be greatly missed by, her husband of 64 years, Wally; her children, Brenda (Al), Linda (Gary), David (Jan) and Doug (Sandra); her grandchildren, Michael, David, James, Julia, Laura, Pamela, Andrew, Tyler (Kris), Colin (Aimee) and Kayla, and her great-grandchild Charlotte. Gail was predeceased by her parents, Wilfred and Christina Grapentine, her brother Blaine (who just recently passed on December 22, 2020), his wife Phyllis, her brother Glen, her sister Yvonne and her husband Jay. She is also predeceased by her in-laws, Harry and Olympia Stoyko, her brother-in-law Steve, her brother-in-law Ted and his wife June. She will be lovingly remembered by her brother Ron, brother-in-law Ed and her sisters-in-law, Yvonne, Nadia, Florence and Rose, as well as many nieces and nephews and their families.
Gail was born in Oakbank, MB and attended school there. After high school, she left Oakbank to live in the big city of Winnipeg and to attend Success Business College. She then went to work at the Manitoba Teachers' Society where she met Wally. Mom and Dad were married on August 11, 1956 and in 1959, moved to 106 McMeans Avenue West in Transcona where they lived for over 61 years. Mom was a devoted wife and mother and family was the center of her life - dedicating her days to raising her children. She was also a second mom to many of our friends who loved to come to the house for Cream of Mushroom soup and grilled cheese sandwiches. As the kids got older, she went back to work as a bookkeeper at P&H Grain Ltd. and later retired from All-Fab Building Ltd. Mom was absolutely overjoyed when her children got married and grandchildren came along. From Christmas turkey dinners to birthday celebrations and especially the grandchildren sleepovers, Grandma took care of all the details and made sure everyone had what they needed. And even though she claimed to not be much of a traveller, Mom (along with Dad) organized family camping trips across North America and did an overseas trip to New Zealand in 1986. Later, she loved travelling to be with her grandchildren whether it be in British Columbia, Banff and Jasper or all over Manitoba. She created memories that will stay with us forever.
Mom was a woman of great commitment. She was an active member of the Transcona Memorial United Church and served on many committees including the UCW. She volunteered for several organizations including Meals on Wheels and loved to tell everyone that story when she and Dad were on the receiving end of the meals. Friends from school became the 'Birthday Girls' and they celebrated each other's birthdays for several decades. Marge and John Jaman and Wally and Joan Tostowaryk, as well as many neighbours on McMeans Avenue became lifelong friends that always remained very important to Mom.
The family wishes to extend a sincere thank you to the staff at Meadowood Manor for caring for Mom during a very trying time. She told us many times that she was well looked after and didn't need anything.
Due to the pandemic restrictions, there will not be a service at this time. A memorial service will be planned when it is safe to do so.
If so desired, donations can be made to the Transcona Memorial United Church building fund or a charity of your choice.