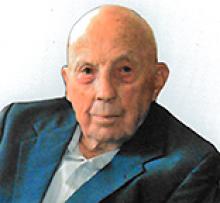 In his 104th year, after a long and fulfilling life, Geordie passed away peacefully at the Pembina Manitou Health Centre.
Geordie was born October 9, 1917 at the family farm south of Altamont, in the New Haven District. He attended Midland School where he finished grade eight and then took his grade nine by correspondence. After leaving school Geordie worked for neighbouring farmers until his older brothers joined the Armed Forces and he then returned home to farm with his parents. His father passed away suddenly in 1951 and Geordie continued farming the home place for the next 30 years.
In 1978 Geordie married Gladys Jordan Smith. They lived on the farm and for the next 15 years spent the winters in Weslaco, Texas, where they made many new friends and took part in various social activities. They also travelled extensively throughout Canada and beyond. For many years Geordie took care of the New Haven Cemetery grounds.
In 1997 Geordie and Gladys moved to the newly built Pembina Manitou Place Seniors Residence where they enjoyed living and participating in all the activities. Gladys passed away in 2011 and Geordie continued to live in his apartment.
Geordie stayed active by helping out at the Log House Tourist Centre, floor curling, playing cards, planting and caring for flowers, along with countless hours of reading. He usually had a number of wood working projects on the go of which so many he donated in support of the Parkinson's Society. He also raised funds and participated in many Parkinson's Annual Walk-a-thons.
Geordie enjoyed being able to drive his car and to work out at "Terrianne's Gym" at the age of 101 years.
In January 2020 Geordie became a resident at the Pembina Manitou Health Centre where he received excellent care and friendship until his passing on December 18, 2020. During his time there he especially enjoyed the musical entertainment for the residents and continued to spend much of his time reading.
Geordie was predeceased by his wife, Gladys and stepson Keith, his parents, Franklin and Emma Hughes, brothers, Earl, Clifford and Carl, and sisters, Mary and Mabel. Geordie is survived by Gladys' children, Garry, Leona, Norleen and Sidney and their families. He is also survived by nephews, Garry (Carol), Richard and Keith Hughes, and niece, Donna Hughes all of Florida, USA.
Cremation has taken place. Burial at a later date in the family plot at St. Matthew's New Haven Cemetery.