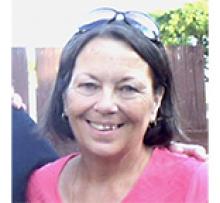 It is with heavy hearts that we announce the passing of Sharon Dale Marks (nee Thorburn) on January 21, 2021.
Sharon was born on April 13, 1947 in Winnipeg, and was predeceased by her parents, Ruth (nee Watson) and Walter Thorburn. She is survived by her husband of 50 years, Ian Marks; her daughters, Dale (Tony), Heather (Jason) and Denise (Trevor). She is also survived by her five grandchildren: Aidan, Sydney, Chloe, Avery, and Hannah. Sharon has a wide network of family with numerous aunts, uncles, and cousins from the Thorburn, Watson, Mezzo and Lyons lineages.
Growing up, Mom moved several times and she often referred to her many dogs as her childhood best friends. There were however two places she loved coming back to, her Nana's farm in Woodridge, MB, and the cabin at Ingolf, ON. She grew up with her cousins and family members in both places, and many summer memories were made. She continued to visit the farm and her Uncle Alec throughout her adult life, and her love of the outdoors endured.
In 1969, Sharon went to London, England on a work visa, where she met her future husband, Ian. They had a whirlwind courtship and were married on November 13, 1970. Ian moved to be with Sharon, always by her side. They began their married life in Toronto, ON, where Sharon worked as an LPN. They later moved to Winnipeg and grew their family.
Mom was someone who was always up for adventure. She enjoyed road trips, and no monument or informational tourist centre was too insignificant to be ignored along the way. Mom was a champion for the underdog, and would often lobby to present another perspective to consider. As a devout fan of the Winnipeg Goldeyes, Mom would happily attend games rain or shine, day or evening, alone or with Dad in tow. Mom was a dedicated volunteer to many associations, including the MS Society, Manitoba Marathon, and the Fringe Festival. As a mature adult, Mom audited courses for several years at the University of Winnipeg, an accomplishment she was particularly proud of.
Mom was fiercely independent, a life force in her that was indomitable to the end. As a parent, she valued modelling humility and social graces, teaching us life skills to become self-reliant and the importance of the elders in our family. She encouraged us to persevere in the face of adversity, as she had so often done herself.
We extend our love and appreciation to those people in Mom's life who continued to see her light and stay connected, particularly in her later years. While there are many people of note, we send our heartfelt gratitude to the Billsons for their ongoing support to her and to our family.
In lieu of flowers, donations can be made in Sharon's name to the Alzheimer Society, or the Canadian Liver Foundation.

"There is no better exercise for your heart than reaching down and helping
to lift someone up."
John Holmes