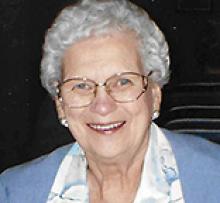 It is with great sadness that the family of Evelyn Griffiths, with nieces Sheila and Dena by her side, announce her peaceful passing on Wednesday, December 2, 2020, at the age of 96 at the St Boniface Hospital.
She will be lovingly remembered by her brother Allan (Jean); sister-in-law Louise (Howard); several nieces and nephews; and special friend Denis. Evelyn was predeceased by her husband Ken; her parents, Colin and Ethel Leask; sisters, Christina, Gladys, Wilma; and brother Keith.
Evelyn was born in Old Kildonan and raised on the family farm in Clandeboye, Manitoba, and received her schooling there. Following school, she attended Normal School and received her teachers certificate. She taught in many little towns in Manitoba, including the Carman area. It was during this time that she met the love of her life, Ken, at the Sperling Community Rink. Ken and Evelyn married in Clandeboye on November 8, 1947. They resided in Sperling, and farmed until 1976. Ken, along with Evelyn's help, was the postmaster in Sperling from 1957 to 1986.
Evelyn spent many hours sewing, knitting, quilting, and enjoyed her needlepoint. She loved the community and much of her crafts were donated to fundraisers and craft sales. With some local women in Sperling, they raised funds for the local rink by making and designing teddy bears. One special bear was made and sent to the Royal Family celebrating the birth of Prince William. Many of Evelyn's family members received one of these bears, and are a treasured gift in our homes today. She also enjoyed curling, was a 4-H leader for many years. Evelyn enjoyed travelling, and joined a group meeting new people and travelling to different locations. She also enjoyed travelling with family and friends, especially to Scotland and trips to BC to visit her brother and sister-in-law. Many stories and lots of laughs were always shared.
In 1987, on retirement, Ken and Evelyn moved into a suite in Winnipeg. Following Ken's death in 1997, Evelyn remained in the suite up until two days before her passing. Evelyn was a kind, unselfish, gentle person and generous beyond words. Her demonstration of love for family and friends was unconditional.
In keeping with Evelyn's wishes, a graveside service, with burial beside her husband in Sperling, Manitoba, will be held at a later date.
The family would like to thank Dr Pierce and nurse, Sandra, along with many others from 4-E at the St. Boniface Hospital for their care and kindness shown to Evelyn. Many thanks, also, to Doyle's Funeral Home in Carman for looking after arrangements.

We had a wonderful Aunt
One who never really grew old
Her smile was made of sunshine
And her heart was solid gold.